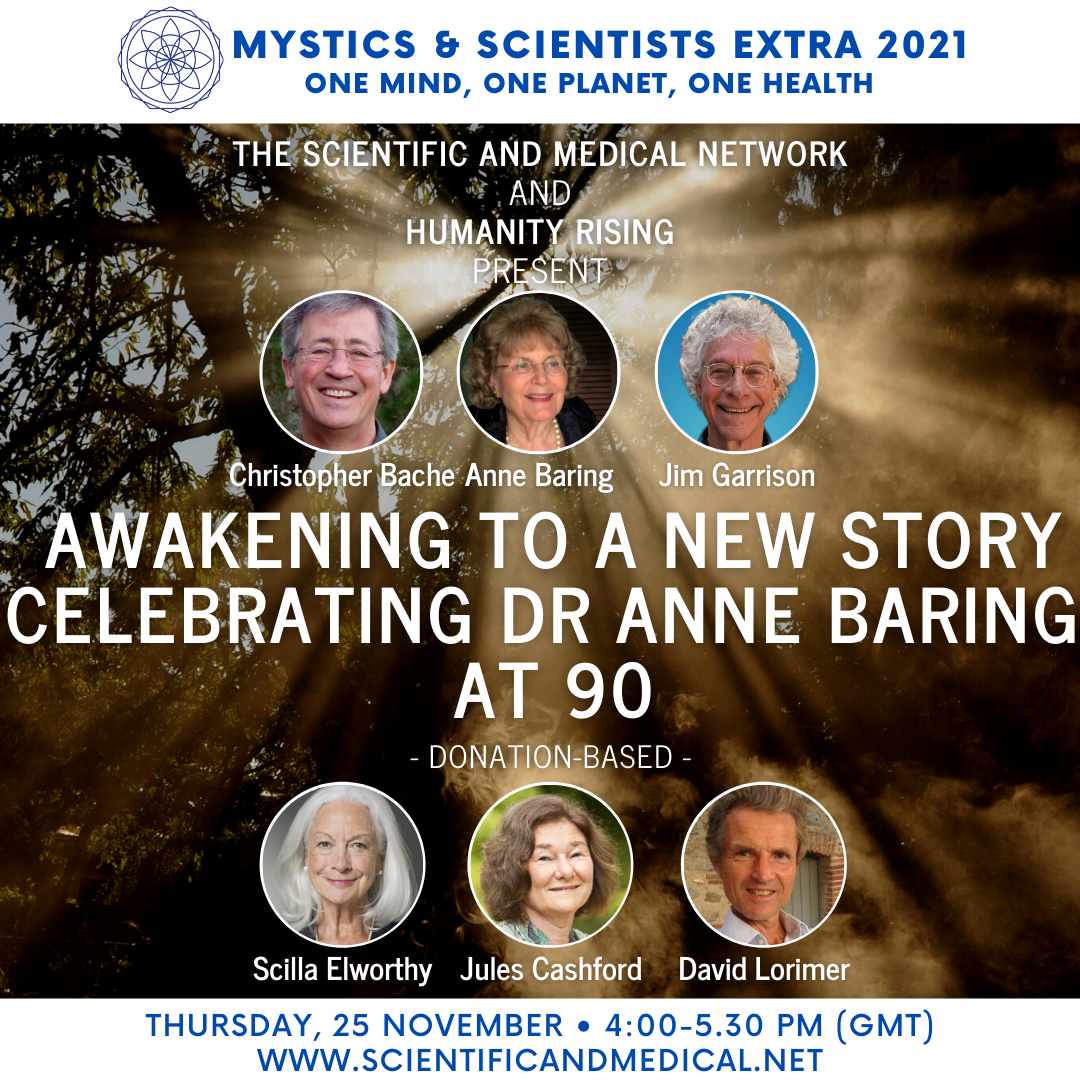 Awakening to a New Story: The Evolutionary Imperative of Our Time – Celebrating Dr Anne Baring at 90

A donation-based event hosted by:

The Scientific and Medical Network

Come and join our conversation to celebrate Anne Baring’s 90th birthday on the day itself! Anne’s work has been a beacon of light, love and wisdom for many decades, and her passion and commitment to the message and presence of Sacred Feminine in our lives and future is profoundly important – she is a living inspiration.

We can all agree that we live at a time of great peril and unparalleled opportunity where the imperative to change our attitude to life becomes more intense by the day. We need to understand the historical and psychological roots of our global crisis if we are to move into a new story of mutuality, reciprocity and interconnection in order to come into harmony with the Earth and each other – choosing love and care over power and exploitation. Nothing less will suffice.

Anne writes: “This is a time of revelation and a crucial time of choice: the revelation of the grievous harm we have inflicted on the life of the planet, and the choice we need to make to transform our relationship with it from one of dominance and exploitation to one of service and love. We live in a world that has been governed by the masculine archetype for some 4,000 years, with no feminine archetype to balance it, no sacred marriage between them. As a result, world culture and the human psyche have become dangerously out of alignment with the earth and the cosmos. All our relationships need healing but above all, our relationship with nature and the earth because that is the primary one that has been out of balance for millennia and is in desperate need of healing.

Collectively, we are going through a profound alchemical process of transformation as we live through this pandemic. This is an unprecedented trauma, affecting the whole of humanity. On top of this, we are confronted by the fact of intensifying global warming and the question of whether we are approaching the end of our time on this planet. Our children and grandchildren are deeply distressed and anxious about their future. These events constitute a spiritual emergency, shaking us to our core. But the very peril we are in may be our salvation if we can grasp the message of what is happening—that this is a rite of passage we are going through: a shamanic rite of profound awakening and healing, an experience powerful enough to stop us in our tracks and help us to understand what has to change. We may take comfort from the fact that the science of alchemy reminds us that in all chaos there is a cosmos; in all disorder a secret order.”

Dr Anne Baring, MA Oxon. PhD in Wisdom Studies Ubiquity University 2018. Jungian Analyst, author and co-author of seven books including, with Jules Cashford, The Myth of the Goddess; Evolution of an Image; with Andrew Harvey, The Mystic Vision and The Divine Feminine; with Dr. Scilla Elworthy, Soul Power: an Agenda for a Conscious Humanity. Her most recent book The Dream of the Cosmos: a Quest for the Soul (2013, updated and reprinted 2020) was awarded the Scientific and Medical Network Book Prize for 2013. The ground of all her work is a deep interest in the spiritual, mythological, shamanic and artistic traditions of different cultures. Her website is devoted to the affirmation of a new vision of reality and the issues facing us at this crucial time of choice.

Visit her webpage at: www.annebaring.com.

Christopher M. Bache, PhD is professor emeritus in the department of Philosophy and Religious Studies at Youngstown State University where he taught for 33 years. He is also adjunct faculty at the California Institute of Integral Studies, Emeritus Fellow at the Institute of Noetic Sciences, and on the Advisory Council of Grof Legacy Training. Chris’ passion has been the study of the philosophical implications of nonordinary states of consciousness, particularly psychedelic states. An award winning teacher and international speaker, Chris has written four books: Lifecycles – a study of reincarnation in light of contemporary consciousness research; Dark Night, Early Dawn – a pioneering work in psychedelic philosophy and collective consciousness; The Living Classroom, an exploration of collective fields of consciousness in teaching; and LSD and the Mind of the Universe, the story of his 20 year journey with LSD.

Jules Cashford studied classics at school, read philosophy at St. Andrews and then did postgraduate research in literature at Cambridge on a Carnegie Fellowship. For some years she was a tutor in Tragedy for Trinity College. She is a member of the International Association of Analytical Psychologists, studied biofeedback and meditation with Max Cade, and lectures on Mythology. With Anne Baring, she is co-author of The Myth of the Goddess: Evolution of an Image, Penguin Books, 1993. She translated The Homeric Hymns, Penguin Classics, 2001, and is author of The Moon: Symbol of Transformation, Cassell Illustrated, 2003, The Mysteries of Osiris, 2010, Atalanta, and a Retelling, with illustrations from the 16th century, of Wolfram von Eschenbach’s Parzival for Younger Readers. With Kingfisher Art Productions she has made two films on Jan van Eyck for St Bavo’s Cathedral in Ghent,  and three films on ‘Gaia’ for the School of Myth, Dartington: Gaia, Mother Goddess Earth in Ancient Greece; the Eleusinian Mysteries; and the Return of Gaia.

Dr Scilla Elworthy is a three times Nobel Peace Prize nominee for her work with Oxford Research Group to develop effective dialogue between nuclear weapons policy-makers worldwide and their critics. She now leads The Business Plan for Peace to help prevent violent conflict and build sustainable peace throughout the world, because it is possible; based on her latest books The Business Plan for Peace: Building a World Without War (2017) and The Mighty Heart: how to transform conflict (2020), which is now an on-line course.

Scilla founded Peace Direct in 2002 to fund, promote and learn from local peace-builders in conflict areas, was awarded the Niwano Peace Prize in 2003 and advised Peter Gabriel, Archbishop Desmond Tutu and Sir Richard Branson in setting up ‘The Elders’. Her TED talk on nonviolence has been viewed by over 1,500,000 people.

David Lorimer, MA, PGCE, FRSA is a writer, lecturer, poet and editor who is a Founder of Character Education Scotland, Programme Director of the Scientific and Medical Network  and former President of Wrekin Trust and the Swedenborg Society. He has also been editor of Paradigm Explorer since 1986 and completed his 100th issue in 2019. Originally a merchant banker then a teacher of philosophy and modern languages at Winchester College, he is the author and editor of over a dozen books, including Survival? Death as Transition (1984,2017) Resonant Mind (originally Whole in One) (1990/2017), The Spirit of Science (1998), Thinking Beyond the Brain (2001), The Protein Crunch (with Jason Drew) and A New Renaissance (edited with Oliver Robinson). He has edited three books about the Bulgarian sage Beinsa Douno (Peter Deunov): Prophet for our Times (1991, 2015), The Circle of Sacred Dance, and Gems of Love, which is a translation of his prayers and formulas into English. His book on the ideas and work of the Prince of Wales – Radical Prince (2003) – has been translated into Dutch, Spanish and French. His new book of essays, A Quest for Wisdom was published in March 2021.

Dr James Garrison is founder and president of Ubiquity University, a global university based in California. He came to this having served as President of Wisdom University which he led from 2005 – 2012, after which he led its transition into Ubiquity University, established in 2012. He has spent his entire professional life in executive leadership, including as co-founder and president of the Gorbachev Foundation/USA (1992 – 1995) and State of the World Forum (1995 – 2004) with Mikhail Gorbachev serving as convening chairman.

Jim received his BA in History from the University of Santa Clara, an MA in History of Religion from Harvard University, and a PhD in Philosophical Theology from Cambridge University. He has written numerous books, including The Plutonium Culture, America as Empire, The Darkness of God: Theology after Hiroshima, Citizen Diplomacy, and Civilization and the Transformation of Power. He lectures regularly on comparative philosophy and religion, world history and politics, and the implications of global warming.

1.) First, register at Humanity Rising on this simple form HERE. If you would like to make a voluntary DONATION on this form you can add a payment. Or if you do not want to donate simply click ‘Maybe later’ and you will be able to register without payment

2.) You will receive a reminder with the Zoom link for Anne’s event on the day (check your spam or promotions folder)

3.) On the day, if you cannot find your Zoom link you can easily watch the live event on YouTube here