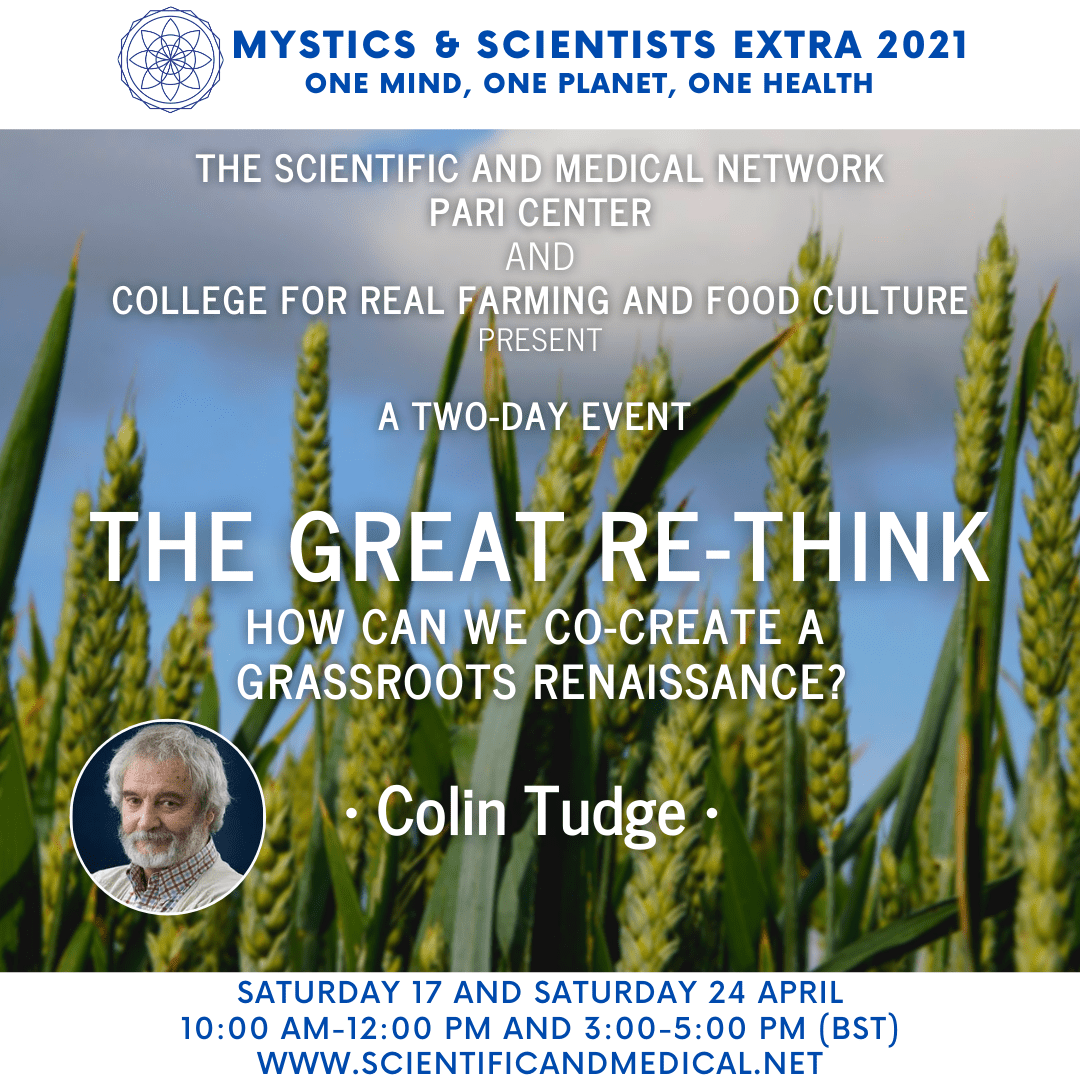 How can we co-create a Grassroots Renaissance?

The Scientific and Medical Network, Pari Center, and College for Real Farming and Food Culture present:

– A four-part series of webinars led by Colin Tudge –

No-one who is half-way alert needs telling (do they?) that the world is in a terrible mess on every front: ecological, political, economic, social, personal. We need not and surely must not give up, for if we do then the mess really will be terminal. But at this late hour, can we, realistically, turn things around?

Colin will be discussing the whole thesis with expert guests, and invites all participants to join in a lively discussion, ask questions or add comments. The programme consists of four webinars on two Saturdays in April.

First we need to decide what we want to achieve—which Colin suggests should be to create:

Governments rarely spell out properly what they are actually trying to achieve. They rely on slogans—as in ‘Make America Great Again’ or ‘Take Back Control.’

We need to achieve the necessary turn-around not merely by Reform, or by out-and-out Revolution—but by Renaissance—re-birth: creating the world we want to see in situ, and leaving what we don’t need to wither on the vine.

But powers-that-be—an oligarchy of governments, corporates, financiers, and their selected intellectual advisers—are not going to do what’s needed. In large part they are leading us in the opposite direction. So we—people at large—need to make the Renaissance happen for ourselves.

We always need to be guided by the twin principles of morality (what is it right to do?) and of ecology (what is necessary and what is possible?). Both are rooted in the much–neglected discipline of metaphysics. Good science is vital but commensurately we need to restore the sense of the sacred. ‘Re-enchantment’ is required.

** All is ripe for discussion. Most basically: does everyone agree with the stated goal? And is it really possible to take care of humanity and our fellow creatures? (Yes, is the answer, but only with truly radical change—brought about by people at large.)

All technologies are pertinent: both ‘high’—emerging from science; and ‘low,’ aka artisanal or traditional—based on craft. Above all, as E.F. Schumacher said, all technologies must be appropriate—one reason why we need to spell out what we are really trying to achieve!

Beyond doubt, though—if we truly aim to create convivial societies while respecting our fellow creatures—the most important technologies and crafts are those of food: agriculture and cooking.

The kind of agriculture that really could help us to achieve ‘convivial societies in a flourishing biosphere’ is what Colin calls ‘Enlightened Agriculture,’ aka ‘Real Farming.’ It is guided by the ideas of agroecology and food sovereignty. Both lead us towards mixed (polycultural), low-input (organic) farms that perforce are complex and so must be skills-intensive (plenty of farmer and growers) and so in general should be small to medium-sized. This is the precise opposite of the vast, high-input, minimum-to-zero labour monocultures that governments and corporates now promote (at our expense!). Clearly, wholesale economic overhaul is required. The market economy cannot deliver.

Now for a great serendipity: there is a perfect one-to-one correspondence between Enlightened Agriculture, sound nutrition, and the greatest of the world’s cuisines as found on an axis from Italy to China. So all we really need to solve the world’s food problems (including much of the world’s problems if health and wildlife conservation) is to farm properly and to re-learn how to cook. Ersatz and veganism are not necessary. All will be revealed.

In short: the whole economy and social life should be built around (enlightened) farming and good cooking. At the moment both are subservient (like everything else) to the grand cause of maximizing and concentrating material wealth (in the forms of real estate and money).

** Among many obvious points for discussion are: Why does craft matter in the age of mass manufacture? What should be its role(s)? And: should we all be vegetarian? And—can we really produce high quality food for everyone? What about the cost? Etc.

Enlightened agriculture (with corresponding cuisine)—and the grand cause of conviviality, personal fulfilment, and a flourishing biosphere—cannot come about without an appropriate, supportive infrastructure—compounded of the government, the economy, and the law.

The economy is ‘the matrix of our lives.’ It is in practice the medium through which we translate our aspirations into material reality. So it is vital to have the right aspirations—and to devise an economy that really does help us to meet our needs and fulfil our dreams (insofar as our dreams are compatible with the bedrock principles of morality and ecological reality).  The economy that now prevails worldwide—that of neoliberalism—is the precise opposite of what’s needed. It is inveterately materialist (money is its only ‘value’); it idealises competition which leads to inequality and strife; it promotes excess which must lead to mass extinction; and ‘the market,’ which has no morality, becomes the moral arbiter.

Instead, we need Green Economic Democracy: the ‘tripartite mixed economy’ (public, private, and community ownership, with all financial endeavours conceived as social enterprises). Governments are not going to make this happen so we, people at large, must do what needs doing despite them. We surely have the power to do so, if we choose to grasp the nettles.

We must make democracy work—difficult but necessary—and those we elect to government must follow the guidelines that Jesus suggested according to St Mark (10: 42-44): ‘whoever would be first among you must be servant to all.’

**The scope for discussion is clearly endless. What are the implications of all this for humanity as a whole and for the political parties in particular? How significant are the many uprisings worldwide? (the US, Hong Kong, Russia, Belarus, Myanmar, India? What can they achieve?) And so on.

‘Mindset’ is the sum of all the ideas, preconceptions, prejudices, predilections and aversions in ‘the basement of our minds’ that we take for granted and rarely pull out for inspection—but inspection is at least salutary and indeed is necessary. The Great Re-Think discusses mindset under four headings: science, morality, metaphysics, and the arts. Very briefly:

Science is wonderful and necessary (of the right kind) but it only ever be ‘the art of the soluble.’ As Sir Peter Medawar put the matter. Emphatically, it is not the royal road to truth, or the only game in town. Without dumbing down science should be seen and taught primarily as an aesthetic and spiritual pursuit—not as the means to control or indeed to ‘conquer’ nature but as an exercize in appreciation. Its role as a provider of high tech—some of which can help to achieve the goals of conviviality, fulfilment, and care of the Earth—is a definite bonus but not the raison d’etre.

Morality should be an exercise not in utilitarian thinking as now, but in virtue ethics, as embraced by all the great religions. The bedrock principles are those of compassion, humility, and reverence for nature (underpinned by the concept of oneness and a sense of the sacred).

Metaphysics asks what many have called ‘the ultimate questions’ which here are taken to be: What is the universe really like (is it just ‘stuff’ as materialist-atheists maintain, or what)? What is the basis of goodness? How do we know what’s true? And, How come? Science and standard western philosophy provide partial answers but metaphysics offers further insights—including the vital notion of transcendence and the sense of the sacred. Metaphysics is the core of all bona fide religions – and is very similar in all of them.

The Arts are the jokers in the pack. Follow the imagination and see where it leads.

** In all this there are enough points for discussion to last a great many lifetimes—including ‘What, in practice, can we do?’  Colin has ideas on this— but what does everyone else think?

Colin Tudge  is a biologist by education and a writer by trade. He read zoology at Peterhouse, Cambridge, and has written a great many articles for a great many publications and for a time was on the staff of  Farmers Weekly, then  New Scientist, then BBC Radio 3. But mainly he writes books on natural history, evolution, food and farming, and, lately, on the philosophy of science and metaphysics. In the early 2000s Colin coined the expression “Enlightened Agriculture”; in 2008 Colin and his second wife Ruth established the  Campaign for Real Farming  and in 2010, together with Graham Harvey, they launched the Oxford Real Farming Conference as the antidote to the established Oxford Farming Conference. His latest book ‘The Great Re-Think – A 21st Century Renaissance’ was awarded the 2020 Scientific and Medical Network Book Prize.

The event is over and ticket sales are now closed.
Tags: Earth, Ecology, Global, Policy, Reform