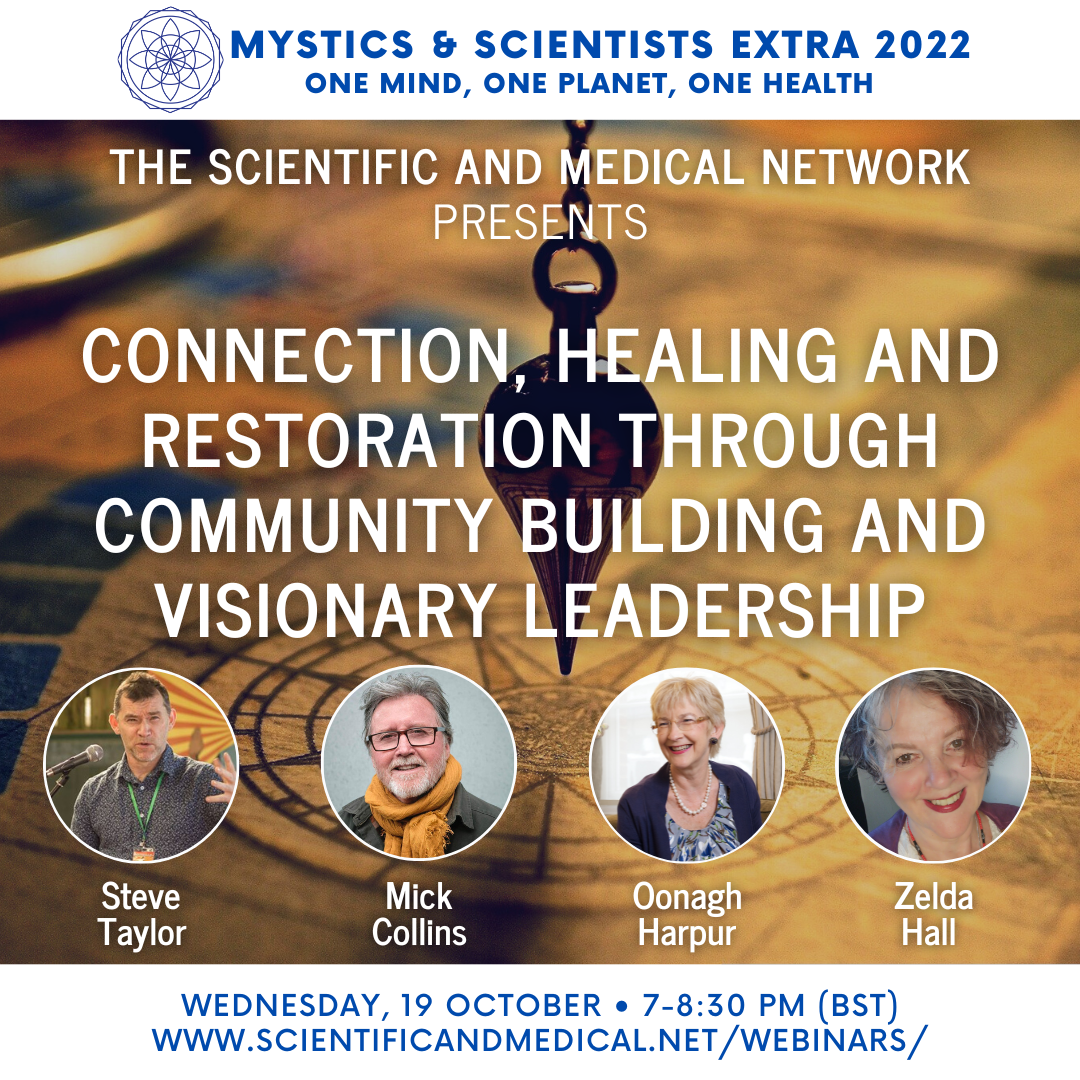 What is the true path to healing division?

Current events show that we have a crisis of visionary leadership.

What can enable the degree of social transformation that we know in our hearts is essential for a flourishing future for the whole of life? Community building and mutual support have an important role to play at a local level.

There will be 7-10 minute presentations by Steve, Zelda and Mick, to which Oonagh will respond. We will then open up to a panel discussion, and Q&A session.

The event will be chaired by Jessica Corneille.

Steve will focus on issues of connection and leadership and explain his model of ‘the continuum of connection’ (which applies both individual and socially) and also the concept of ‘pathocracy’, the tendency for people with narcissistic/psychopathic traits to be attracted to leadership positions, and what can be done to mitigate this.

Drawing on her extensive life experience (see biography below), Zelda will address the increasing polarisation in society in general, especially the polarisation which arose during the pandemic and what we can do to heal these divides. What puts us in danger of ‘othering’? And how do we stay grounded and in touch with our heart.

What if we see leadership as a role of which the cloak may be worn first by one person and then another as their visionary nature reveals itself? Rather than the burden of leadership being carried by one individual who is a mere human.

Dr Steve Taylor is a senior lecturer in psychology at Leeds Beckett University, UK, and a past chair of the Transpersonal Psychology Section of the British Psychological Society. He is the author of several best-selling books on psychology and spirituality, including Extraordinary Awakenings, The Clear Light, Out of the Darkness and Spiritual Science. His books have been published in 20 languages, and he writes blog articles for Scientific American and Psychology Today. Eckhart Tolle has described his work as “an important contribution to the shift in consciousness which is happening on our planet at present.”

Zelda Hall was born and grew up in Northern Ireland in a time of divided communities. After graduating in Mental and Moral Science in Trinity College Dublin, she worked in a large psychiatric institution in Dublin back in the 70s – enough to put her off such large institutions for life. She was a speaker at the first march of thousands of women against violence in Dublin in 1978 and was a founder member of the Dublin Rape Crisis Centre.

She is a psychologist/therapist and has worked in private practice for nearly forty years. She lives in the Netherlands. A major influence in her work is Process Oriented Psychology (Arnold and Amy Mindell) and she was chair of the association in the Netherlands for seven years. She has given workshops in various places in the world, lectured in Trinity College Dublin and taught in the Transpersonal Therapy and Counselling module in the Masters’ programme in Consciousness Spirituality and Transpersonal Psychology of the Alef Trust.

Her interests and obsessions involve the work of Riane Eisler on dominator consciousness, the balancing of the masculine and feminine on personal, cultural and political levels, and the concept of the soul contract (James Hillman) and life myth (Jung and Mindell) as revealed in early childhood dreams.

After leaving the Army (infantry) in 1977, Dr Mick Collins travelled around the world for six years learning about different cultures. He then lived in a Buddhist Monastery in the North of England for three years. He went through a spiritual emergency and after this he trained as an Occupational Therapist. He worked in acute mental health settings and as part of a specialist psychological therapies team.

Mick spent nine years training in transpersonal psychotherapy, integrating spirituality and dream work into his therapeutic practice. He has a diploma in holistic coaching and a PhD from the University of East Anglia, where he held an academic role as a Lecturer in Occupational Therapy.

Mick is the author of three books on the broad theme of how we may activate our deepest potential to transform the burgeoning multiple global crises before us. His latest book is titled: The Restorative Spirit: Illuminating the Soul in a Time of Global Awakening. For more information, visit: www.transformocene.co.uk.

Oonagh Harpur became the first woman CEO in the Professional Services sector more than 30 years ago, she has worked tirelessly with boards in the public and private sectors to deliver results through building trust and integrity in boards. Her experience has convinced her that boards who govern culture well facilitate both entrepreneurial success and shared value creation for all stakeholders. She believes business has a critical role in creating a world where people and the planet can thrive. Oonagh is an Independent Non-Executive at KPMG and a member of its Public Interest Committee. She has had a long career as a serial CEO, Chair, Non-Executive Director and Trustee in the energy, health, professional and financial services sectors in the UK and USA. Oonagh is also a qualified Business Coach and a Trustee of the SMN.

Jessica Corneille is a research psychologist specialised in spontaneous spiritual awakening experiences. She graduated with a Masters’ Degree in Psychology (Distinction) from the University of Greenwich, where she focused her studies on altered states of consciousness. Her mission is to challenge the default pathologisation of awakening experiences by helping to inform and encourage mainstream psychology to look beyond the current designated spectrum of ‘normality’, to encompass the transpersonal as something that is intrinsic to the human experience. Jessica has presented at a number of academic conferences, including with the British Psychological Society. She works for the Scientific and Medical Network, is part of the Galileo Commission steering committee, a collaborator of the Emergent Phenomenology Research Consortium and Spiritual Crisis Network, and a certified Kundalini Yoga teacher. She has also worked as a contracted leadership/empowerment coach, including under the KSA government.

All bookings will receive a link to view the recording.

BOOKINGS are now closed for this event.