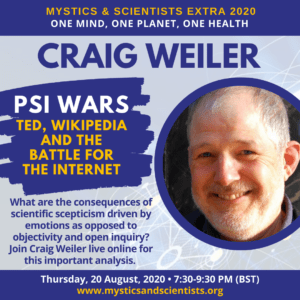 In this eye-opening webinar chaired by Honorary Member Dr Rupert Sheldrake, Craig will examine the widespread phenomenon of dogmatic scepticism in relation to psi research, where the phenomena are often dismissed as impossible in principle in spite of extensive evidence to the contrary. However, as Larry LeShan wrily observed, there are no impossible facts. Nevertheless, such scepticism – also targeting Network scientists such as Rupert and Nobel Laureate Prof Brian Josephson – remains widespread among the scientific and academic communities and raises important sociological, psychological and philosophical issues, acting as a brake on the necessary paradigm shift to open up a new science of consciousness. Craig will discuss and illustrate these concerns with significant examples.

Craig writes: Scepticism towards research into psychic abilities is as old as the research itself. Despite growing evidence over the decades, sceptics remain as hostile towards this research as ever. This open hostility is worth examining because it replaces any and all true scientific discussions of the phenomena. Despite a wealth of data ranging from personal experiences to rigorous scientific studies, sceptics continually claim that there is no evidence at all. In addition to this, discussions with parapsychology sceptics almost always reveal a lack of knowledge, a lack of interest in researching the data and complete faith in, and complete reliance on exclusively sceptical sources.

These are strong indicators that sceptics are not responding to the research with objectivity and the spirit of inquiry but are driven rather by an emotional response that clouds their judgment and causes them to defend their position of non-acceptance at all costs. This zealotry has spilled over into Wikipedia, where parapsychology is listed incorrectly as a pseudoscience and it has so far been impossible for anyone to engage with existing Wikipedia editors and get this corrected. When parapsychology sceptics engage with the paranormal, their response has more in common with the psychology of fundamentalist religious thinking than with scientific inquiry.