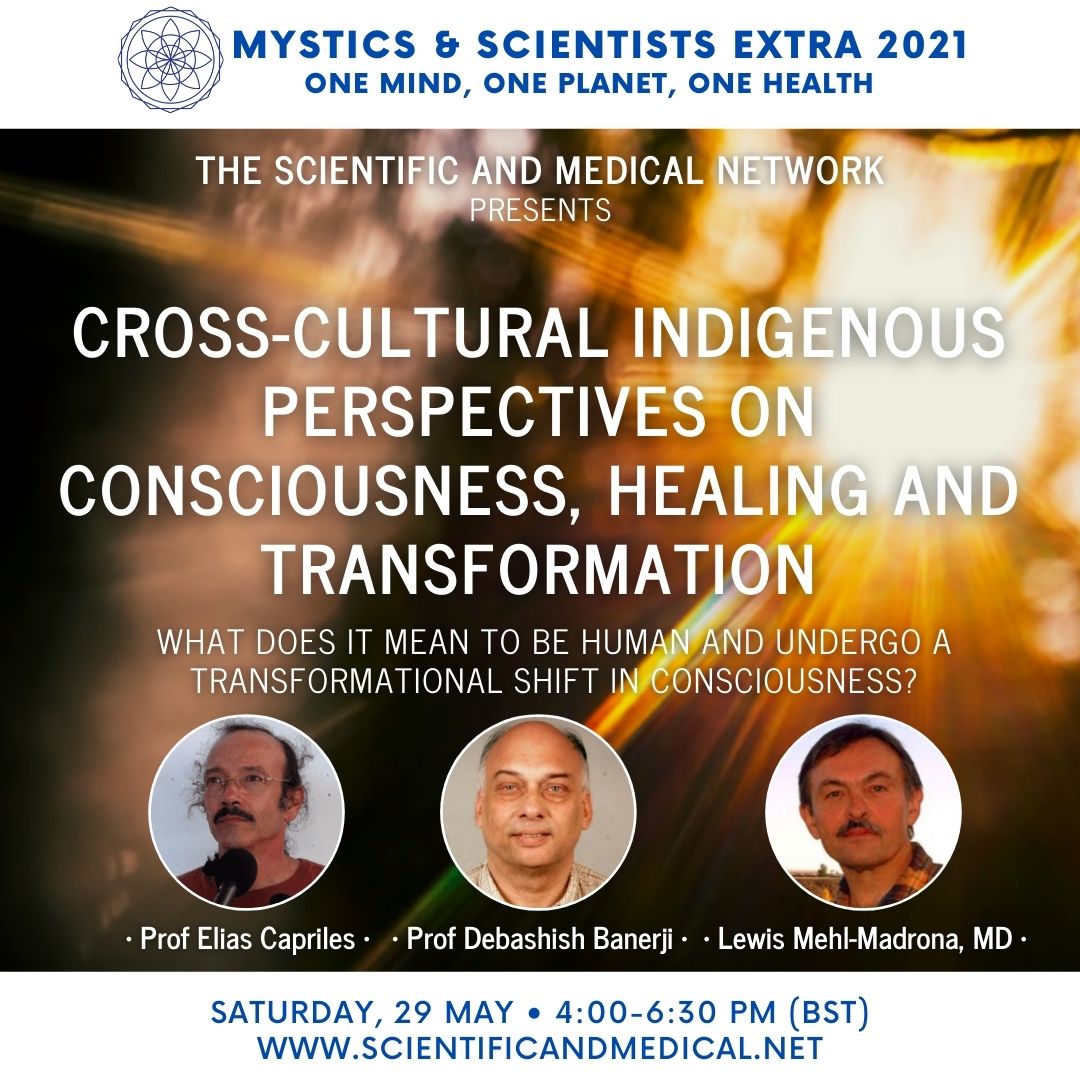 What does it mean to be human and undergo a transformational shift in consciousness?

Join us for an illuminating panel discussion with Elias Capriles, Debashish Banerji and Lewis Mehl-Madrona. We will explore cross-culturally indigenous wisdom traditions in terms of their knowledge-base, methods and practices as a means to facilitate a transformational shift in consciousness.

This webinar is for people searching for transpersonal-existential meaning and purpose in life beyond the constraints of Western modernity.

Prof Elias Capriles spent 10 years in South Asia—mainly Nepal and India—where he met his first Dzogchen teachers and did many 3-months retreats focused mainly on Trekchöd. He received teachings on Trekchöd from Trinley Norbu Rinpoche and Dudjom Rinpoche, and the main cycles of Nyingma empowerments from the other Great Masters of the 1970s. It was also at that time that he met Chögyal Namkhai Norbu, his last great Dzogchen teacher.

On returning to the West, Elias became chairman of Eastern Studies and then researcher-professor at the University of The Andes, Mérida, Venezuela, where he taught Philosophy, Buddhism, Asian Religions, Globalization and Asian Aesthetics and Arts. Currently he is a teacher of Buddhism and Dzogchen certified by Dzogchen Master Namkhai Norbu Rinpoche. He lectures, leads workshops and teaches courses in many countries of the Americas, Europe and Asia.

His works deal with: Dzogchen and Tibetan Buddhism; transpersonal and integral psychology; ontology; philosophy of history; political philosophy; aesthetics; epistemology; sociology; axiology, etc. He managed “spiritual emergency refuges” where those undergoing such natural self-healing processes could go through them safely, and is an ecological activist. Among his nineteen books published on paper, five e-books, over forty published papers and twelve book chapters, on transpersonal philosophy and psychology most recent and best known is the four-volume  ‘The Beyond Mind Papers:  Transpersonal and Integral Philosophy and Psychology’ and ‘Philosophy and Psychology of Awakening’   (Blue Dolphin, Nevada City, CA, 2013/La Castalia, 2020). His most recent book is  ‘Chamanismo y Dzogchén ’ (La Llave, Barcelona, Spain).

Dr Lewis Mehl-Madrona, MD, graduated from Stanford University School of Medicine and trained in family medicine, psychiatry, and clinical psychology. He has been on the faculties of several medical schools, most recently as associate professor of family medicine at the University of New England. He continues to work with aboriginal communities to develop uniquely aboriginal styles of healing and healthcare for use in those communities. He is interested in the relation of healing through dialogue in community, and psychosis.

He is the author of  ‘Coyote Medicine’, ‘Coyote Healing’,   and  ‘Coyote Wisdom’,  a trilogy of books on what Native culture has to offer the modern world.  He has also written ‘ Narrative Medicine’, ‘Healing the Mind through the Power of Story: the Promise of Narrative Psychiatry’,  and, his most recent book with Barbara Mainguy,  ‘Remapping Your Mind: the Neuroscience of Self-Transformation through Story’. Lewis currently teaches with the family medicine residency at Eastern Maine Medical Center (EMMC) in Bangor, where he does inpatient medicine, outpatient precepting, and obstetrics.

Lewis has been studying traditional healing since his early days and has written about the work of healers and the process of healing.  His primary focus has been on Cherokee and Lakota traditions, though he has also explored other Plains Cultures and those of Northeastern North America.  His goal is to bring the wisdom of indigenous peoples on healing back into mainstream medicine, and to transform medicine and psychology through this wisdom, coupled with more European derived narrative traditions.  He writes an (almost) weekly blog on health and mental health for www.futurehealth.org.  His current interests centre around psychosis and its treatment within community and with non-pharmacological means, narrative approaches to chronic pain and its use in primary care, and further developing healing paradigms within a narrative/indigenous framework.

Prof Debashish Banerji is the Haridas Chaudhuri Professor of Indian Philosophies and Cultures and the Doshi Professor of Asian Art at the California Institute of Integral Studies (CIIS), San Francisco. He is also the Program Chair for the East-West Psychology department at CIIS. His academic interests lie in postcolonial, cross-cultural and posthuman approaches to Indian philosophy, psychology and culture. He has authored and edited several books on major figures of “the Bengal Renaissance,” on Critical Posthumanism, Yoga Psychology and a variety of creative and art-related projects. His most recent books are ‘Meditations on the Isha Upanishad: Tracing the Philosophical Vision of Sri Aurobindo’ (Sri Aurobindo Samity and Maha Bodhi Publishers, 2019) and ‘Integral Yoga Psychology: Metaphysics and Transformation as Taught by Sri Aurobindo’ (Lotus Press, 2020).

The event is over and ticket sales are now closed.
Tags: Indigenous, Medicine, Psychology, Tradition, Transpersonal