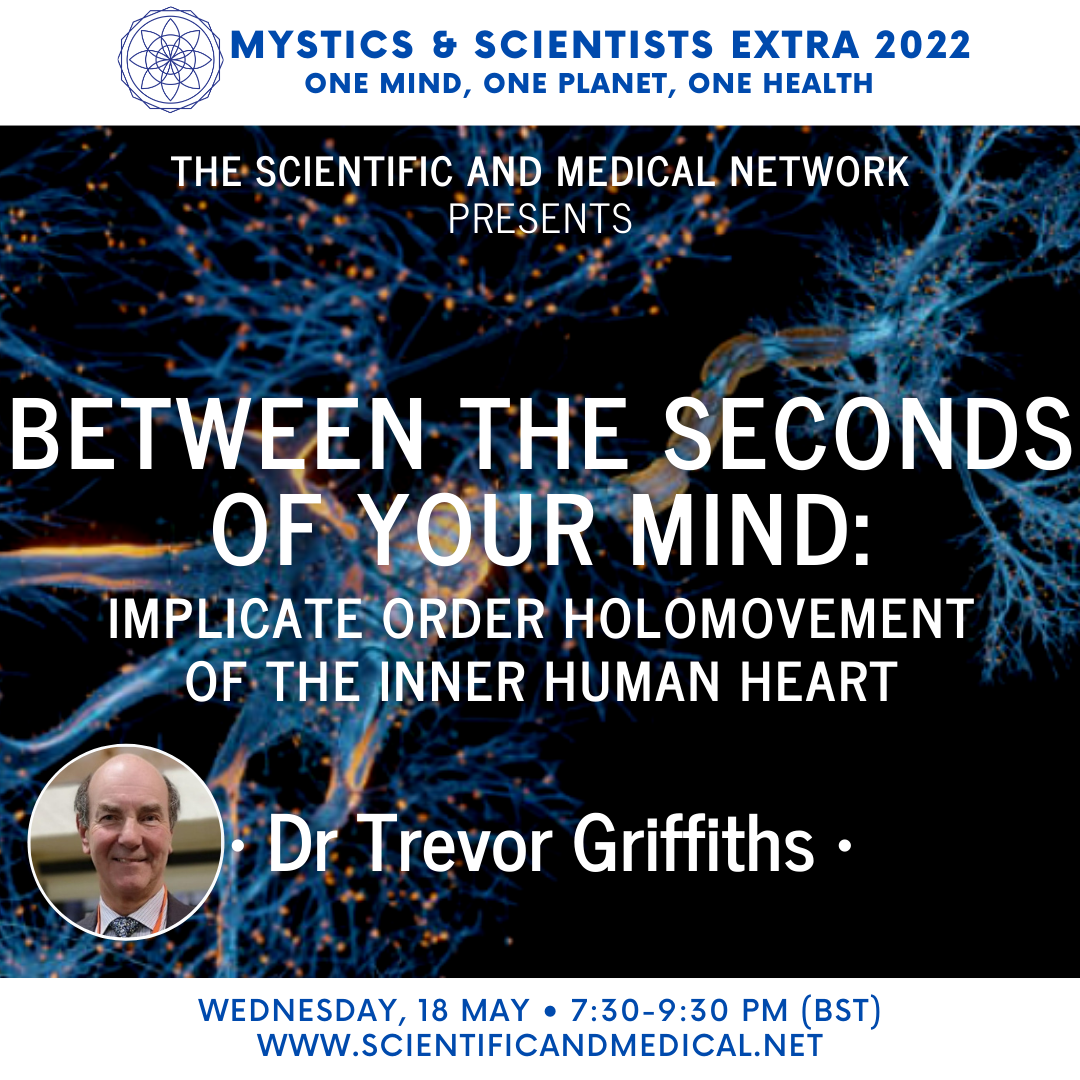 Dr Trevor Griffiths – Between the Seconds of your Mind: Implicate Order Holomovement of the Inner Human Heart

Do brains filter out our connection into life?

How does the strange, indeterminate quantum world that is researched scientifically and much theorised about emerge into human experience in a way that scales up to influence our powers of choice in unpredictable social situations?

Dr Griffiths starts from a neuropsychology theory of how the human being self-orientates in space, time, and reality during our waking life. He describes how mental phenomena can be either above this conscious orientation horizon, or below it in a realm of experience that may be called the inner human heart of human awareness. He then presents a profoundly new picture of information as a conversational verb, not a noun, which is the inner human heart connecting mutually into the implicate order of the cosmos described by David Bohm.

Dr Griffiths uses the ancient Celtic icon of eternal movement, the triquetra, to explain the eternal holomovement of the implicate order emerging in our human hearts and minds. He made 3D printed models of triquetral networks that show the synergy of unending mutual exchange emerging within waves and particles, and scaling up to describe the emotive and rational relationships between people in groups – a systemic model uniting the physical, social and personal ecologies.

In this talk, Dr Griffiths will start from two unusual events while at Oxford University that broke the scientific rules of space and time, one of which saved his life by a predictive dream that led him to make a choice to act in a way outside his normal habits. These events, and others he has experienced, have led him to formulate a triquetral cosmology that can rationally account for psi events, while allowing regularities to emerge that sustain life-enhancing order as a general, but fuzzy boundaried, set of simple rules of emergent life.

Dr Trevor Griffiths studied medicine, neuroscience, and immunology at Oxford University before becoming a pioneering doctor for 25 years in systemic family healthcare, promoting healthy communications. He founded a Charity to prevent illness and socially disruptive behaviour by teaching about ‘the rough end of emotional literacy’. The Emotional Logic Centre is now international on five continents with a strong and growing schools’ programme. Trevor now trains trainers and supervisors of Emotional Logic Coaches full-time, with an aim to have every family able to use Emotional Logic language to manage disappointments and setbacks in the most constructive ways. He started publishing in this field in 1999, and has two books, a children’s illustrated book series, and several papers in print.

With his wife, Marian, also a doctor, they ran their home as a therapeutic community for 20 years along the lines of Celtic Christian hospitality. Trevor nearly left medicine to study comparative religion, but has maintained that interest as a hobby in the decades since. His main joy is in promoting the unity that underlies ever-diversifying and ever-renewing life, while working with the many sources of grief that trouble people. Trevor and Marian have two daughters and four grandchildren, all of whom exercise their powers of choice in diversifying ways to keep their parents on their toes.