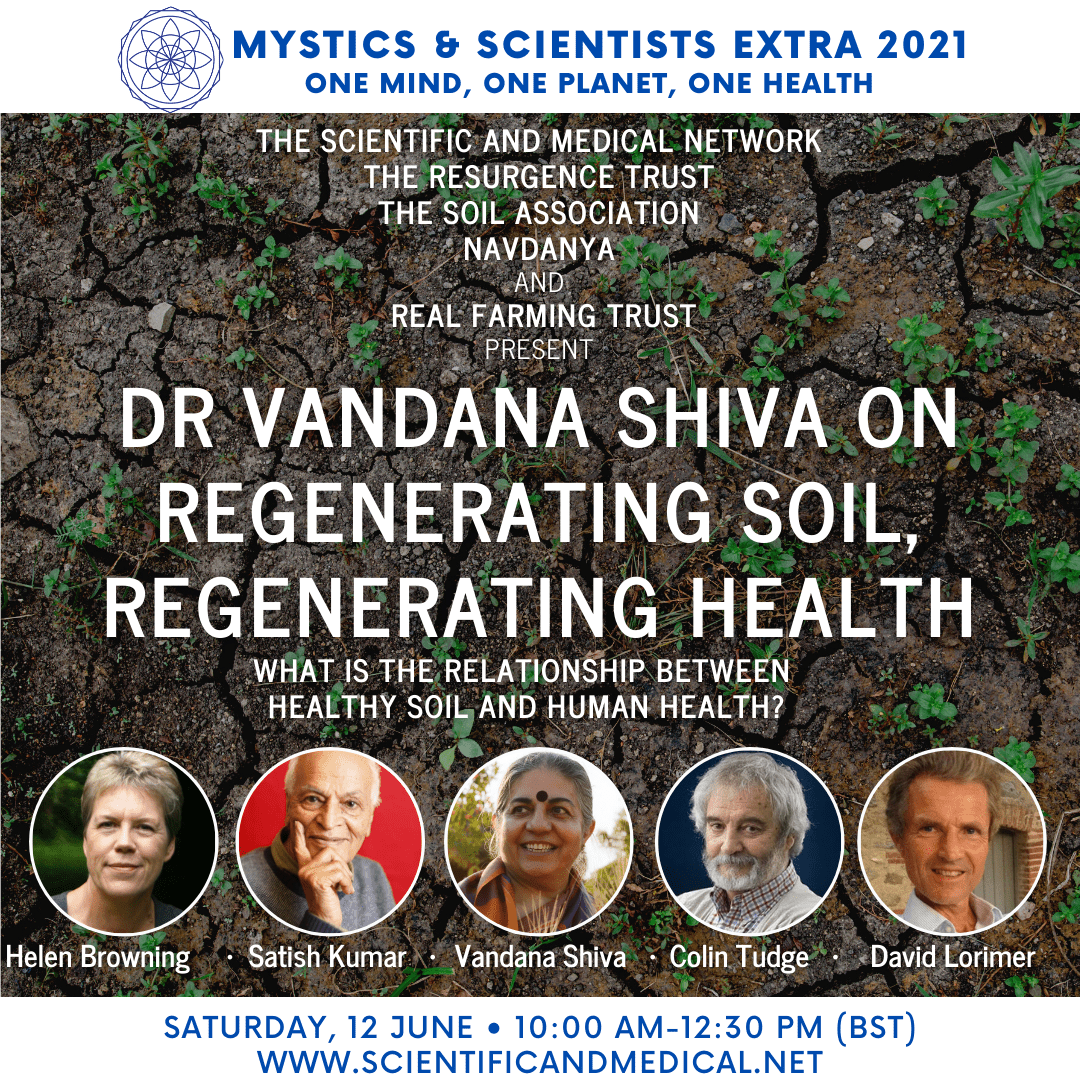 What is the relationship between healthy soil and human health?

The Scientific and Medical Network, The Resurgence Trust, The Soil Association, Navdanya and the Real Farming Trust present a panel discussion with:

“Regenerative agriculture provides answers to the soil crisis, the food crisis, the climate crisis and the crisis of democracy.” – Dr Vandana Shiva

Join us for this unique opportunity to hear one of the world’s most articulate and passionate environmental activists address this fundamental issue of regenerating soil and human health within the context of her ecological vision of our common future based on the Oneness of Life rather than a system of global control and monopoly of the 1% that actually undermines our health.

The connection between the health of the soil and human health was specified by Sir Albert Howard and the founder of The Soil Association, Lady Eve Balfour, as far back as the 1940s. Howard had learned this from his experience of Indian traditions and wrote: ‘the birthright of all living things is health. This law is true for soil, plant, animal, and man: the health of these four is one connected chain.’ It follows that any weakness or defect in the health of any earlier link eventually reaches us and that regeneration of the soil is a key factor in regenerating human health.

Vandana writes: “History provides ample evidence that civilizations which ignored the health and well-being of the soil, and exploited it without renewing its fertility, disappeared along with the soil.

Both ecological science and our ancient wisdom teaches us that all life depends on soil. But we are now unthinkingly adopting the illusion that human progress is based on how fast we can destroy, bury and consume the soil.

Uncontrolled urbanization, mega mines, superhighways and gigantic infrastructure projects are the burial grounds of fertile soil. We are forgetting that life grows from soil, not concrete and tarmac.  The book ‘ Food, Farming & Health ’ shows how our health is a continuum from the soil, to the plants, to our bodies. It demonstrates how chemical farming depletes the soils of nutrition, producing plants that are nutritionally empty but full of toxic residues, which cause us – its consumers – to suffer from diseases related to nutrient deficiency and/or toxins.”

⦿ Please note: this is a donation-based event.

Dr Vandana Shiva is trained as a Physicist and did her PhD on the subject ‘Hidden Variables and Non-locality in Quantum Theory’ from the University of Western Ontario in Canada. She later shifted to inter-disciplinary research in science, technology and environmental policy, which she carried out at the Indian Institute of Science and the Indian Institute of Management in Bangalore. In 1982, she founded an independent institute, the Research Foundation for Science, Technology and Ecology in Dehra Dun dedicated to high quality and independent research to address the most significant ecological and social issues of our times, in close partnership with local communities and social movements. In 1991, she founded Navdanya, a national movement to protect the diversity and integrity of living resources, especially native seed, the promotion of organic farming and fair trade. In 2004 she started Bija Vidyapeeth, an international college for sustainable living in Doon Valley in collaboration with Schumacher College, UK.

Dr Shiva combines sharp intellectual enquiry with courageous activism. Time Magazine identified Dr Shiva as an environmental ‘hero’ in 2003 and Asia Week has called her one of the five most powerful communicators of Asia. Forbes magazine in November 2010 has identified Dr Vandana Shiva as one of the top Seven most Powerful Women on the Globe. Dr Shiva has received honorary Doctorates from University of Paris, University of Western Ontario, University of Oslo and Connecticut College, University of Guelph. Among her many awards are the Alternative Nobel Prize (Right Livelihood Award, 1993), Order of the Golden Ark, Global 500 Award of UN and Earth Day International Award. Lennon ONO grant for peace award by Yoko Ono in 2009, Sydney Peace Prize in 2010, Doshi Bridgebuilder Award, Calgary Peace Prize and Thomas Merton Award in the year 2011, the Fukuoka Award  and The Prism of Reason Award in 2012, the Grifone d’Argento prize 2016 and The MIDORI Prize for Biodiversity 2016, Veerangana Award 2018, The Sanctuary Wildlife Award 2018 and International Environment Summit & Award 2018. Her most recent book is ‘Oneness vs 1%’.

Satish Kumar was the Editor-in-Chief of Resurgence Magazine (now with the Ecologist) for 43 years and was the Founder of Schumacher College in Dartington. At nine years of age, Satish renounced the world and joined the brotherhood of Jain monks. At the age of eighteen, he left the monastic order and became a campaigner working to turn Gandhi’s vision of a peaceful world into reality.  He undertook an 8,000-mile peace pilgrimage, walking without any money, to deliver packets of ‘peace tea’ to the leaders of the four nuclear powers. Satish is the author of five books. His autobiography, ‘No Destination’, first published by Green Books in 1978, has sold over 50,000 copies.

Helen Browning OBE has been Chief Executive of the Soil Association since 2011. She is a member of the Food Ethics Council, trustee of the RSPB and a Commissioner for the RSA’s Food Farming and Countryside Commission. She sits on the BBC’s Rural Affairs Advisory Committee and the National Food Strategy Advisory Panel. She has a very mixed organic farm Wiltshire, with dairy, beef, pigs, cereals and is now also experimenting with agro-forestry. Her recent book ‘PIG; tales from an organic farm’, written with her partner Tim Finney, tells more about the trials and tribulations of their farming and food life. Prior to rejoining the Soil Association, Helen was Director of External Affairs for the National Trust. She has had a number of roles in agri-politics over the years, including the Government’s Policy Commission on the Future of Farming and Food (‘the Curry Commission’) and chaired the England Animal Health and Welfare Implementation Group. Helen was awarded an OBE in 1998 for her services to organic farming.

Colin Tudge  is a biologist by education and a writer by trade. He read zoology at Peterhouse, Cambridge, and has written a great many articles for a great many publications and for a time was on the staff of  Farmers Weekly, then  New Scientist, then BBC Radio 3. But mainly he writes books on natural history, evolution, food and farming, and, lately, on the philosophy of science and metaphysics. In the early 2000s Colin coined the expression “Enlightened Agriculture”; in 2008 Colin and his second wife Ruth established the  Campaign for Real Farming  and in 2010, together with Graham Harvey, they launched the Oxford Real Farming Conference as the antidote to the established Oxford Farming Conference. His latest book ‘The Great Re-Think – A 21st Century Renaissance’ was awarded the 2020 Scientific and Medical Network Book Prize.

The Resurgence Trust is an educational charity that seeks to bring about a just future for people and planet. Resurgence promotes ecological regeneration, social justice and spiritual fulfilment through a broad range of events and its publications, The Ecologist – free, daily, online environmental news, and Resurgence & Ecologist magazine, which recognises the interconnectedness of today’s global challenges and offers systemic, positive and practical solutions to the most pressing issues of our time.  For future events from The Resurgence Trust, head to  resurgenceevents.org.

The College for Real Farming and Food Culture is an arm of the Real Farming Trust that seeks to develop and promulgate the idea of Enlightened Agriculture, rooted in the principles of Agroecology and Food Sovereignty —  key components of an Agrarian Renaissance, which in turn is intended to spearhead the far broader people-led Renaissance that is urgently needed to halt the present decline of the world’s societies and ecosystems. The College is a project of the Real Farming Trust, together with the now global Oxford Real Farming Conference. Learn more at www.collegeforrealfarming.org.

Navdanya means “nine seeds” (symbolizing protection of biological and cultural diversity) and also the “new gift” (for seed as commons, based on the right to save and share seeds. In today’s context of biological and ecological destruction, seed savers are the true givers of seed. This gift or “dana” of Navadhanyas (nine seeds) is the ultimate gift – it is a gift of life, of heritage and continuity. Conserving seed is conserving biodiversity, conserving knowledge of the seed and its utilization, conserving culture, conserving sustainability. For more information, please visit www.navdanya.org.

The Soil Association is the UK’s leading membership charity campaigning for healthy, humane and sustainable food, farming and land use. They are the only UK charity working across a spectrum of human health, the environment and animal welfare. For more information, visit www.soilassociation.org.

The event is over and ticket sales are now closed.
Tags: Earth, Ecology, Soil, Spirituality, Sustainability