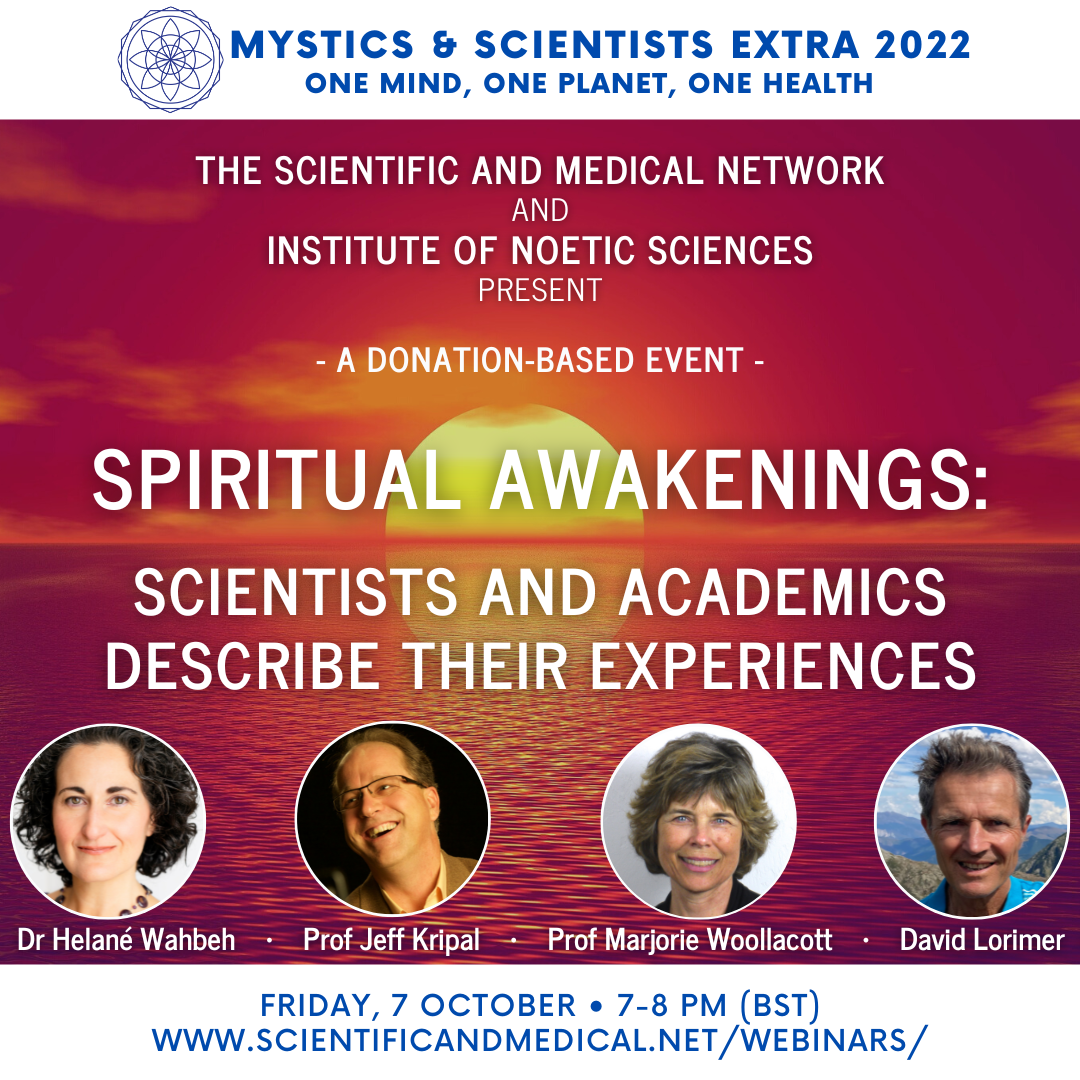 In partnership with the Institute of Noetic Sciences (IONS)

Join us on Friday, October 7th at 7 pm (BST) for a special panel discussion with four of the contributing authors from the recently published book, Spiritual Awakenings: Scientists and Academics Describe Their Experiences. In this webinar, you’ll hear from David Lorimer, Marjorie Woollacott, Jeff Kripal, and IONS Director of Research, Helane Wahbeh, as they discuss their personal insights from their individual spiritual awakenings and the resulting transformation in their lives.

The 57 essays within this new book are from scholars who discuss the challenges to their credibility in academia and the scientific field, if and when they shared these spiritual experiences publicly, that obliged them to live a ‘divided life’ between the personal and the professional. We hope you will join us as these panellists discuss their personal experiences of spiritual awakening, and how it transformed their perceptions of reality, views on consciousness, behaviours, and the overall direction in their personal and professional life.

Please note: This event is donation-based, with preset donation tickets and a free ticket option for anyone who wishes to use it.

Helané Wahbeh, ND, MCR, is the Director of Research at the Institute of Noetic Sciences and an adjunct assistant professor in the Department of Neurology at Oregon Health & Science University. Dr Wahbeh is clinically trained as a naturopathic physician and research trained with a Master of Clinical Research and two post-doctoral research fellowships. She has published on and spoken internationally about her studies on complementary and alternative medicine, mind-body medicine, extended human capacities, stress, posttraumatic stress disorder and their relationships to physiology, health, and healing. Dr Wahbeh is especially known for her research around — and noetic approach to — channelling.

Jeffrey Kripal, PhD, is the J. Newton Rayzor Chair in Philosophy and Religious Thought and the Associate Dean of the Humanities at Rice University. He is also the Associate Director of the Center for Theory and Research at the Esalen Institute in Big Sur, California, where he also chairs the Board of Trustees. Jeff is the author of eight monographs, including, most recently, The Flip: Epiphanies of Mind and the Future of Knowledge (2019). He is presently working on a three-volume study of paranormal currents in the history of science and esoteric literature for the University of Chicago Press collectively entitled The Super Story. His full body of work can be seen at http://jeffreyjkripal.com. This year he co-ordinated a conference on Archives of the Impossible.

Marjorie Woollacott, PhD, is an Emeritus Professor and prior chair of the Dept. of Human Physiology, and member of the Institute of Neuroscience, at the University of Oregon. She taught courses in neuroscience and rehabilitation, as well as complementary medicine and meditation. She is President of the Academy for the Advancement of Post-Materialist Sciences (AAPS) and Research Director for the International Association of Near-Death Studies (IANDS). Her current research interests are in meditation, spiritual awakening, end-of-life experiences and after-death-communication. She has published more than 200 scientific articles and written or co-edited eight books, including Is Consciousness Primary? Her latest book, Infinite Awareness (2015) (winner of eight awards, including the 2017 Parapsychological Association Book Award, Eric Hoffer Book Award and the Nautilus Book Award) pairs Woollacott’s research as a neuroscientist with her self-revelations about the mind’s spiritual power.

David Lorimer, MA, PGCE, FRSA, is a writer, poet, lecturer and editor who is a Founder of Character Education Scotland, Programme Director of the Scientific and Medical Network, and former President of Wrekin Trust and the Swedenborg Society. Originally a merchant banker then a teacher of philosophy and modern languages at Winchester College, he is the author and editor of over a dozen books, most recently The Protein Crunch (with Jason Drew) and A New Renaissance (edited with Oliver Robinson). He has edited three books about Beinsa Douno: Prophet for our Times (1991, 2015), The Circle of Sacred Dance, and Gems of Love, which is a translation of his prayers and formulas into English. He is a founding member of the International Futures Forum and was editor of its digest, Omnipedia – Thinking for Tomorrow. He was also a Trustee of the St Andrews Prize for the Environment and a Churchill Fellow. His book on the ideas and work of the Prince of Wales (now King Charles III), Radical Prince, has been translated into Dutch, Spanish, and French. He is the originator of the Inspiring Purpose Values Poster Programmes, which have reached over 300,000 young people.

Please note: This event is donation-based, with preset donation tickets and a free ticket option for anyone who wishes to use it.