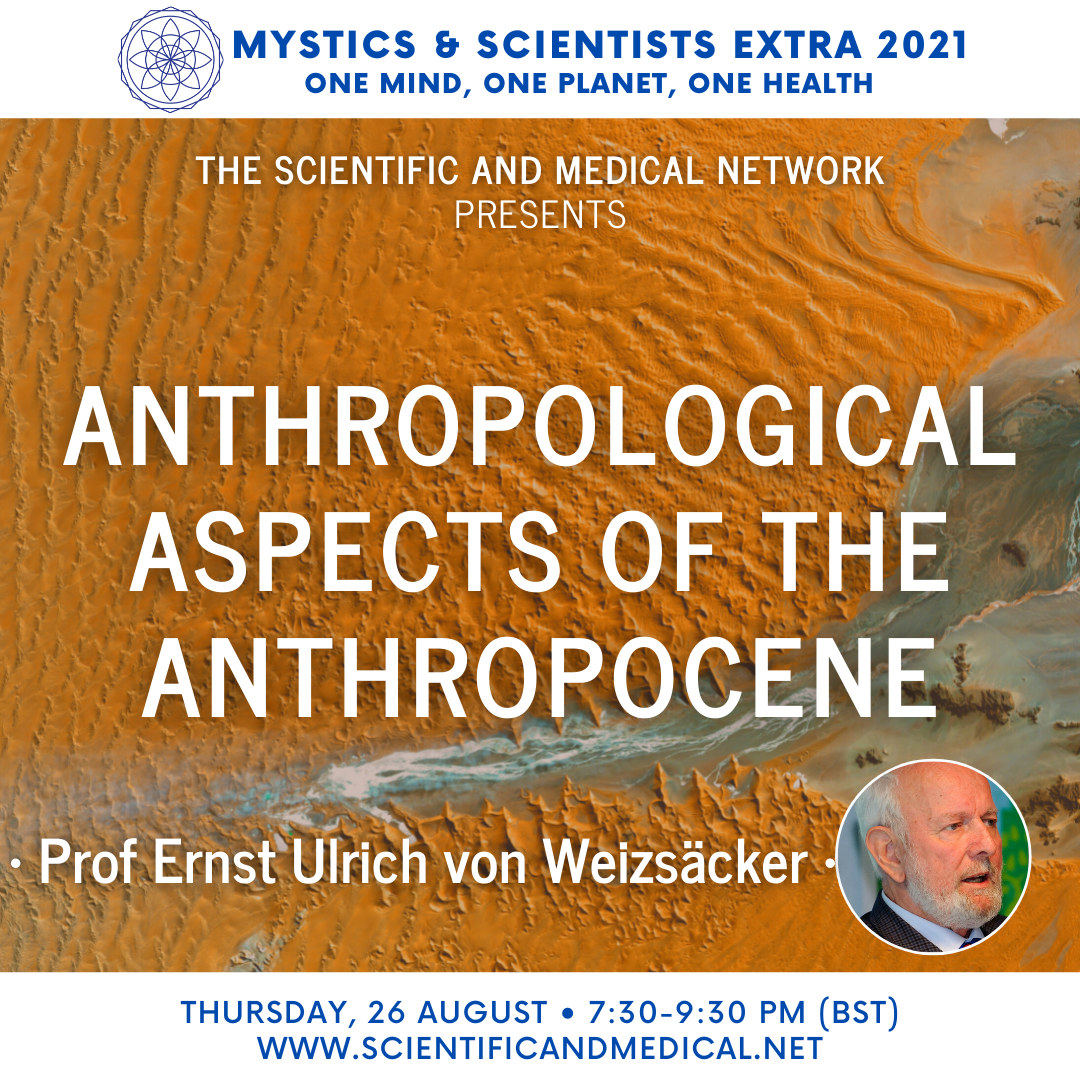 How can we achieve a stable future?

Please note: DATE CHANGE
This event’s previous date has been CHANGED and the
new date is Thursday, 26 August, 7:30 PM (BST)

Ernst says: “Anthropology includes both human biology and human culture. Our biology, our genetic outfit, has not really changed for thousands of years. But our habits have changed.

The Anthropocene is a new term, invented 20 years ago and denoting the “geological age” following the extremely benign geological age of the Holocene, beginning some 12,000 years ago with the disappearance of the huge ice covers over Northern Europe and North America.

The Anthropocene is the horrendous time we are now living in, beginning roughly in the year 1950. Since that year it became clear that human interventions have brought about damaging changes in the atmosphere, the hydrosphere, the soils, and biodiversity. The tenfold increase of humans, agriculture to feed over 7.8 billion humans, the massive burning of fossil carbon is causing the “Sixth Extinction” (Elizabeth Kolbert), meaning the sixth catastrophic slashing of animal and plant species. (The fifth extinction catastrophe was some 65 million years ago).

‘Anthropological Aspects of the Anthropocene’ is a new term that I am now proposing. It is some sort of an  imperative  we had better recognize: we need to create a culture that includes stabilizing and then shrinking of the number of humans on this planet. It includes massive decarbonization of industry, mobility, agriculture, buildings. Together with an Australian team, I wrote a book called “Factor Five” in which we show that a five-fold decarbonization in those four economic sectors is technically feasible: meaning to reduce greenhouse gas emissions by 80% with no reduction of well-being. But achieving it means different politics, economics, and culture.”

Prof Ernst Ulrich von Weizsäcker was Co-President of the Club of Rome from 2012 to 2018 and now serves on the Executive Committee of the Club as Honorary President. In earlier phases of his life, Ernst was full professor of interdisciplinary biology and university president at German universities, Director at the UN Centre for Science and Technology for Development. Returning to Germany, he became Director of the Institute for European Environmental Policy, and in 1991 founding President of the Wuppertal Institute for Climate, Environment and Energy, which developed into a leading think tank on energy efficiency, material flows and climate policy. From 1998 – 2005 he was Member of the German Bundestag, chairing consecutively the Select Committee on Globalization, and the Environment Committee. From 2006-2008 he served as Dean of the Graduate School of Environmental Science and Management, University of California, Santa Barbara. In 2007, he was appointed Co-Chair (with Ashok Khosla) of UNEP’s International Resource Panel, a function he held until end 2014. Returning to Germany from Santa Barbara in 2009, he was invited by Freiburg University to serve as Honorary Professor, teaching climate and resource policies. In 2013, he became listed among the 100 most influential thinkers of the world. He is married to Christine von Weizsäcker, President of Ecoropa, and they have five children.

Honours include three honorary doctorates, the (WWF) Duke of Edinburgh Gold Medal, the Italian Premio de Natura (shared with PM Gro Brundtland), the Japanese Takeda Award, the German Environment Prize, and the Grand Cross of Merit of Germany. He is a member of the European Academy of Arts and Science, and of the World Academy of Art and Science.

Ernst von Weizsäcker was lead author of four Reports to the Club of Rome: ‘Factor Four’ (1995 with Amory Lovins and Hunter Lovins), ‘Limits to Privatization’ (2005 with Oran Young and Matthias Finger), ‘Factor Five’ (2009 with Charlie Hargroves et al), and ‘Come On!’ (2018, with Anders Wijkman). All were translated into between five and twenty languages (Chinese Mandarin included in all four cases).