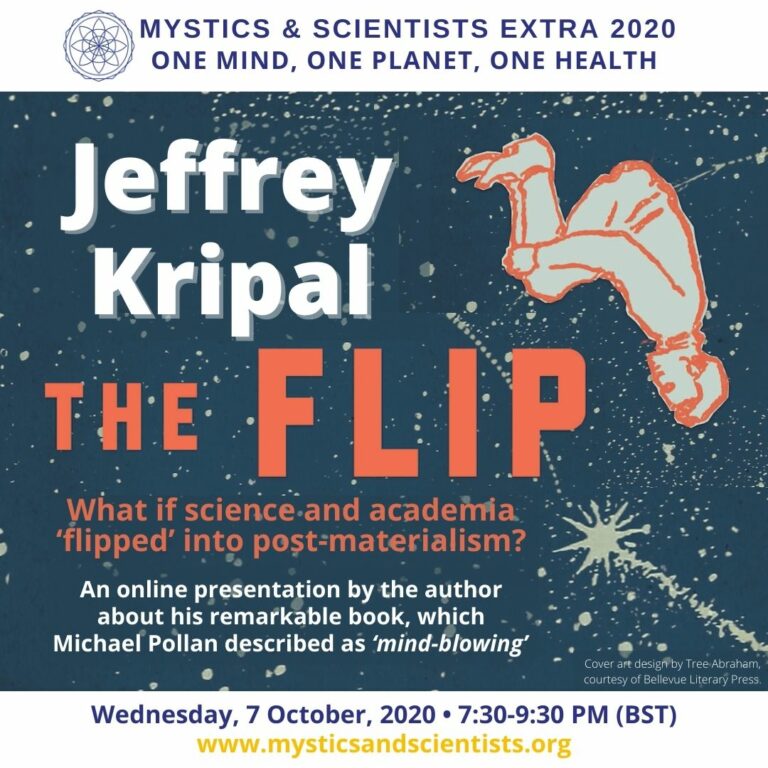 Prof Jeffrey Kripal The Flip: Who You Really Are and Why It Matters

What if science and academia ‘flipped’ into post-materialism?

Join Jeff Kripal to learn about the dramatic transformations of scientists and academics following a ‘flip’ – a reversal of perspective often born of an extreme, life-changing experience. Jeff’s book gives us a visionary new worldview of the cosmos, human consciousness and their intimate connection.

Jeffrey Kripal brilliantly shows how all human experience – and even the history of science itself – is often inspired or driven by an epiphany of mind, when we realise that everything in the cosmos is alive and connected. There is a large, scattered but remarkably consistent set of stories about extreme live-changing experiences that intellectuals, scientists and medical professionals have been reporting for centuries. We meet the people past and present who have made this visionary, intuitive leap towards new forms of knowledge, including Mark Twain’s prophetic dreams, Marie Curie’s séances, AJ Ayer’s near–death experience, and Einstein’s cosmically attuned mind.

Without surrendering an iota of our remarkable scientific and medical knowledge about the material world and the human body, Kripal argues for a profoundly new view of mind and the cosmos.  He provides the evidence that direct and personal contact with a deeper reality causes a life-changing ‘flip’ of viewpoint, often resulting in new scientific and technological discoveries, that makes mathematical discovery and scientific knowledge possible at all.

Kripal also addresses and attempts to heal the academic antagonism between the sciences and humanities, arguing that both are responsible for the modern rejection that there is consciousness, meaning or purpose in the universe.  If that is true, then questions about what is mind or what is consciousness “don’t matter – we are literally talking about nothing”.

But if we flip this view, and can conclude that consciousness or mind is fundamental and probably even cosmic, then questions of the soul and human destiny become real, and this, he asserts, is “a more interesting world to live in.”