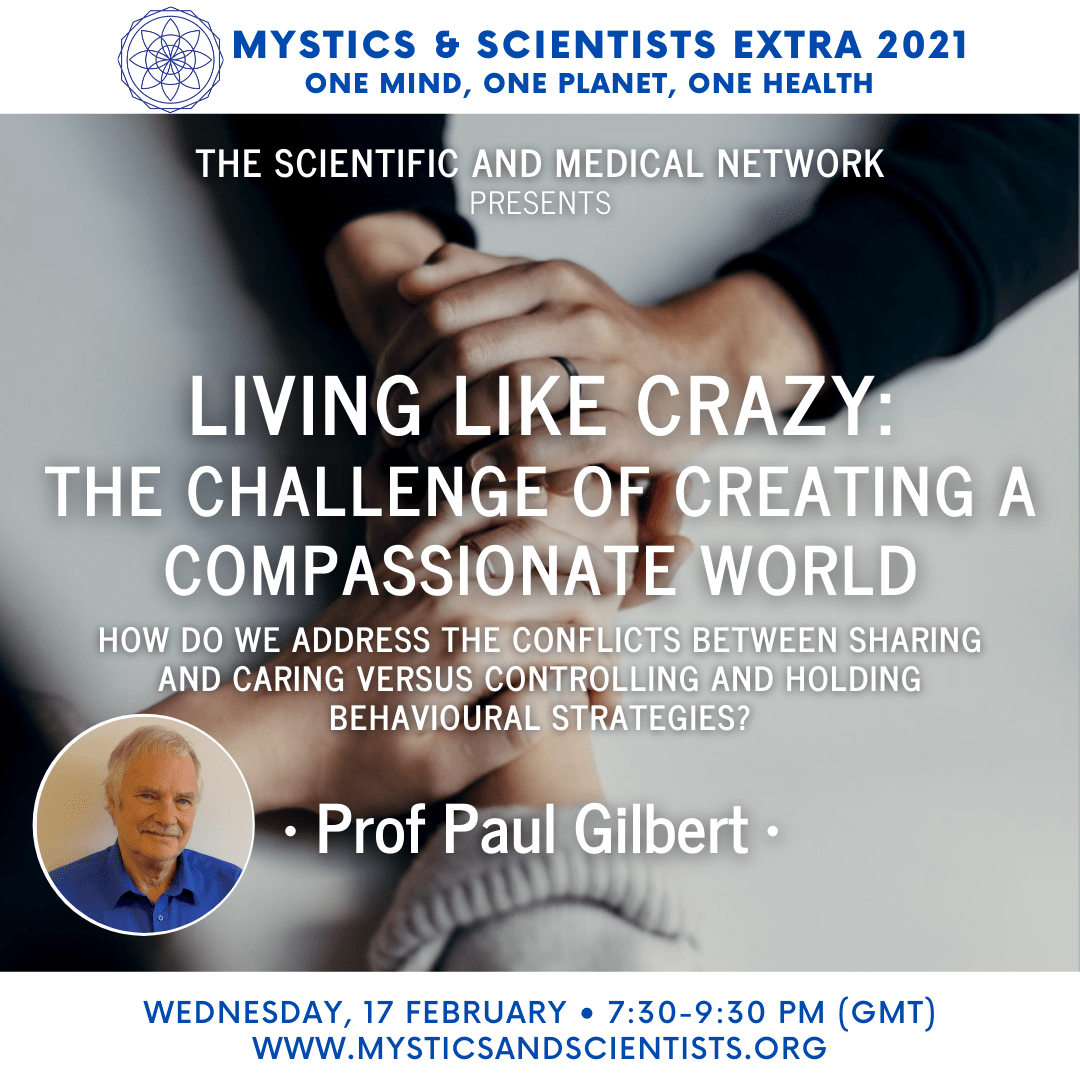 Prof Paul Gilbert – Living Like Crazy: The Challenge of Creating a Compassionate World

How do we address the conflicts between sharing and caring versus controlling and holding behavioural strategies?

Join Paul Gilbert – one of the world’s leading researchers on compassion – to find out how we can best promote the common good by stimulating care and share strategies for compassionate lifestyles in today’s high resource and competitive environments.

For thousands of years, spiritual traditions and social activists have appealed to humans to adopt compassionate ways of living. Yet along with our potential for compassion and self-sacrifice, the last few thousand years of wars, slavery, tortures, and holocausts have shown humans can be extraordinarily selfish, callous and cruel.

This talk offers an evolutionary analysis of the problem as linked to evolved, often conflicting, motives and strategies and how our archetypal potential can be dangerously shaped by culture, inadvertently forcing us to live in crazy and destructive ways.

Compassion versus callousness can be understood at the level of ‘evolved resource-regulation strategies’ called ‘care and share’ versus ‘control and hold’. Control and hold are typical of primates that operate through intimidatory social hierarchies. Care and share, which is a particular human resource-regulation strategy, evolved during the age of the hunter-gatherer, when our ancestors lived in relatively interdependent small, mobile groups.

While some lived in resource rich environments and, others less so, for the most part resources were for immediate use and sharing. The advent of agriculture reduced mobility, increased resource availability, group size, resource competition and storing and holding. This reintroduced control and hold strategies into our minds which had by then, thanks to the hunter-gatherer lifestyles, evolved complex human intelligence competencies for reasoning, planning, and self-awareness.

Many of our most typical forms of oppressive and anti-compassionate behaviour are the result of planned control and hold strategies. This talk suggests that rather than thinking singularly about individuals competing with one another, we need to consider the different resource regulation strategies competing within populations. Means to stimulate care and share strategies in today’s high resource and competitive environments are also considered as ways to promote the common good.

Paul Gilbert,  FBPsS, PhD, OBE is Professor of Clinical Psychology at the University of Derby and honorary visiting professor at the University of Queensland. Until his retirement from the NHS in 2016 he was Consultant Clinical Psychologist for over 40 years. He has researched evolutionary approaches to psychopathology with a special focus on mood, shame and self-criticism in various mental health difficulties for which Compassion Focused Therapy was developed. He has been a Fellow of the British Psychological Society since 1993, was President of the BABCP 2002-2004, and was a member of the first British Governments’ NICE guidelines for depression. He has written/edited 21 books and over 250 papers and book chapters. In 2006 he established the Compassionate Mind Foundation as an international charity with the mission statement ‘To promote wellbeing through the scientific understanding and application of compassion’. There are now a number of sister foundations in other countries. He was awarded an OBE by the Queen in 2011 for services to mental health. He established and is the Director of the Centre for Compassion Research and Training at Derby University UK. He has written and edited many books on compassion. His latest book is ‘Living Like Crazy’.