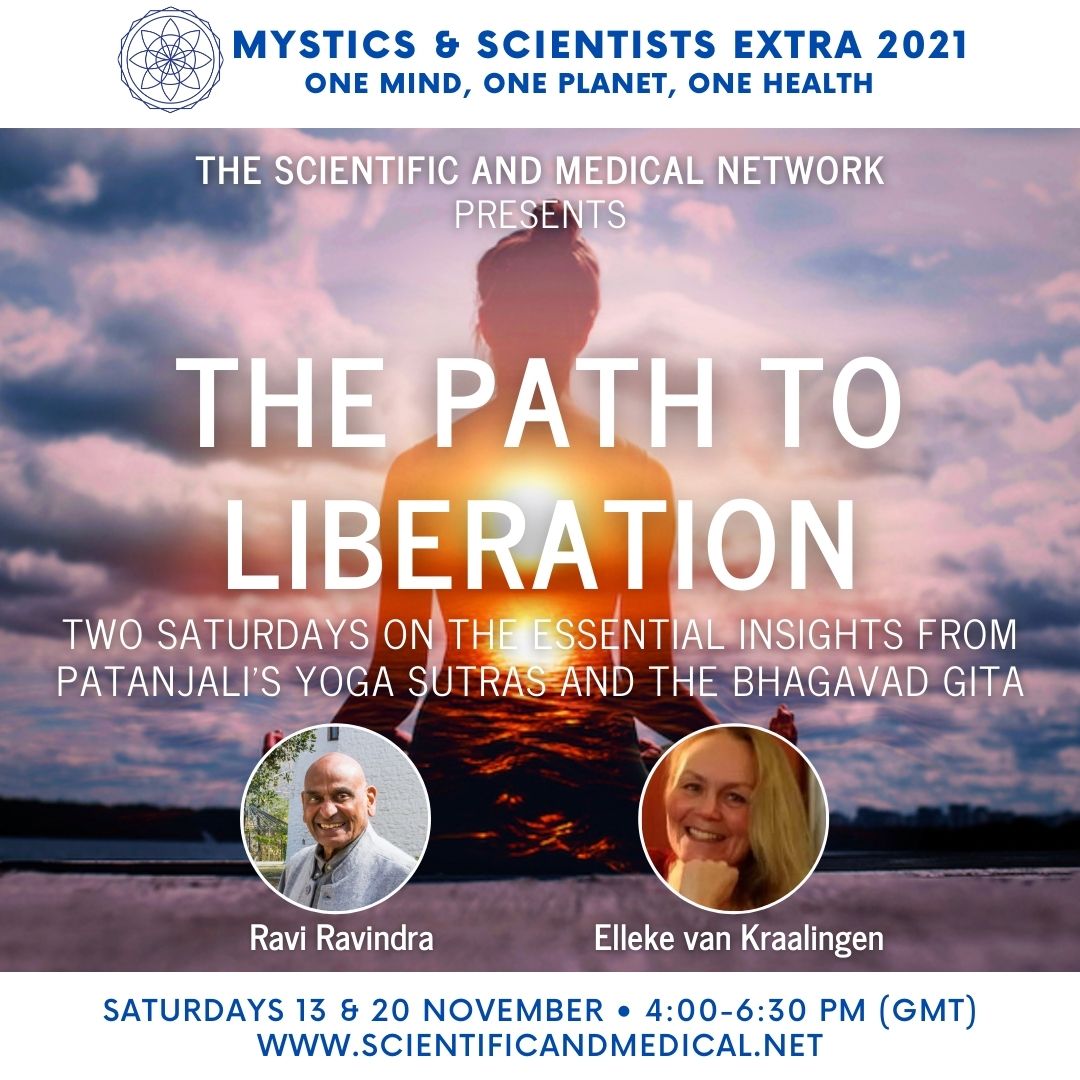 Essential Insights from Patanjali’s Yoga Sutras and the Bhagavad Gita

The Yoga Sutras of Patañjali are ancient pearls of universal wisdom, practical and applicable to our modern daily life. According to Patañjali, the purpose of Yoga is to cultivate a state of consciousness based on Unity and connectedness, instead of separation. This state of Being can be achieved by learning to master our mind, leading to freedom from our habit of thinking and usual ego-driven self. On this Yoga path, which is essentially a path of meditation, we naturally learn to diminish the causes of suffering (kleshas) that stand in our way.  The first cause of suffering is ignorance (avidyā) which lies at the roots of all that we tend to think of as ‘evil.’ Ignorance manifests as other obstacles such as my identification with a self separated from the Whole Ocean of Being, attachment to pleasure or suffering, addiction to status quo and fear. The transformation of a searcher towards inner freedom is possible by undertaking a serious discipline of Yoga, impartial self-inquiry, and surrender to the Divine within.

In the Bhagavad Gita, Krishna, personification of the Divine Teacher within each of us, teaches his beloved pupil Arjuna, who symbolizes our personality, the art of right action. In order to master the art of right action a searcher needs to practice Yoga and learn to distinguish and find a balance between Being and Doing, knowing when to act and when not to act. This cannot be accomplished without detachment from the results of our actions and learning how to act in harmony and service for the benefit of the Whole. In the Bhagavad Gita we learn about different paths in Yoga, like Buddhi Yoga (Yoga of awareness) Karma Yoga of action, Jñāna Yoga of sacred knowledge, Dhyāna Yoga of meditation, and Bhakti Yoga of love and devotion, all leading to the unfolding of the potential of our Divine Consciousness.

(All timings in UK, GMT)

Professor Ravi Ravindra is a native of India, he emigrated to Canada and is Professor Emeritus at Dalhousie University, in Halifax, Nova Scotia, where he served for many years as a professor in three Departments: Comparative Religion, Philosophy, and Physics. He was a Member of the Institute of Advanced Study in Princeton, a Fellow of the Indian Institute of Advanced Study in Simla, and Founding Director of the Threshold Award for Integrative Knowledge. He has been a member of the Board of Judges for the prestigious Templeton Prize. He is an honorary member of the Scientific and Medical Network. Ravindra’s spiritual search has led him to the teachings of J. Krishnamurti, G. Gurdjieff, Yoga, Zen, and a deep immersion in the mystical teachings of the Indian and Christian traditions. He is the author of many books on religion, science, and spiritual disciplines.

Elleke writes: “My journey in Yoga and Meditation began when I was a child. In my early teenage years, I spontaneously started to meditate, following an inner guideline and set off on the path of yoga. Yoga and meditation became a way of life and a source of inner wisdom and love, from which I receive my nourishment. There from sprang the aspiration to guide others on their way. For more than 32 years now I have been teaching the ancient form of Raja Yoga and for 20 years I have been training Yoga Teachers. With love I continue to teach my passion for Yoga and meditation, explaining and exploring its classical philosophy.

In addition, I have had other professional activities as a psychologist, naturopath, life coach, author of several books and I am a mother of four children (who have grown up now).

Together with my husband Pieter we started La Borde Blanque in 2013, centre for yoga, meditation and healing in Occitania, Midi-Pyrenees, France. Here we realize our dream and share our life and work experience in a holistic way, within the power, serenity and beauty of nature and our animals. My great passion, teachers and friends are our Icelandic horses.”