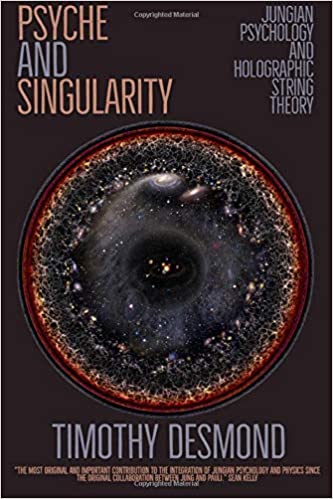 In 1944 the psychiatrist and pioneer of transpersonal psychology Carl G. Jung had a heart attack, which led to an exceptionally vivid near-death experience, recalling which he said: “It seemed to me as if behind the horizon of the cosmos a three dimensional world had been artificially built up, in which each person sat by himself in a little box. . . . I had been so glad to shed it all, and now it had come about that I—along with everyone else—would again be hung up in a box by a thread. ” Eight years later, in a letter dated February 29, 1952, Jung speculated about how to describe psychic energy in the context of Einstein’s general theory of relativity. He concluded the letter with the following equation: “Psyche=highest intensity in the smallest space,” which can be translated as Psyche = Singularity (a point of infinite density). In the spirit of Jung’s twenty-five-year partnership with Wolfgang Pauli, a co-founder of quantum mechanics, to seek parallels between psychology and physics, Timothy Desmond will explain how closely Jung’s psychology aligns, ironically, with the atheistic, materialist physicist Leonard Susskind’s holographic string theory of information conservation at the event horizons of black holes and the cosmic horizon of our inside-out black hole universe.

Timothy Desmond teaches philosophy, religion, and ethics as an Adjunct Professor at The College of Southern Maryland. He is also Director of Administration at the Supporters of Agricultural Research (SoAR) Foundation. He earned a BA in Philosophy and Political Science from Boston College; a Master of Liberal Studies degree from Georgetown University; an MA in Political Science from the University of Hawai’i in Manoa, with a concentration in Alternative Futures Studies; and a PhD in Philosophy and Religion from the California Institute of Integral Studies, with a specialization in Philosophy, Cosmology, and Consciousness. He is the author of Psyche and Singularity: Jungian Psychology and Holographic String Theory.