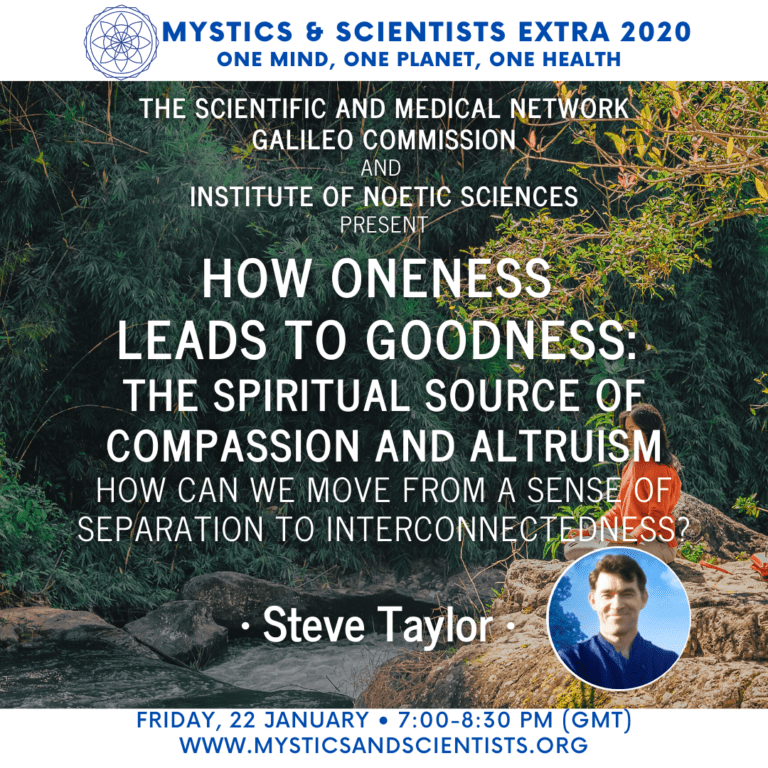 Steve Taylor – How Oneness Leads to Goodness: The Spiritual Source of Compassion and Altruism

and
The Institute of Noetic Sciences

How can we move from a sense of separation to interconnectedness?

Join Steve Taylor to explore the roots of goodness in a sense of connection,
and of evil in a corresponding sense of separation and lack of empathy.

Discover how best to transcend our sense of separateness and attune to our fundamental oneness – and thus develop an altruistic outlook.

In this session, based on his recent book Spiritual Science, Steve Taylor explains how human goodness – as manifested in qualities such as compassion, altruism and justice – is related to a sense of connection. Conversely, what we think of as ‘evil’ is related to a sense of separation. A sense of separation brings an inability to empathise, or take other people’s perspectives, and a preoccupation with one’s own desires and goals. A sense of separation also creates a sense of lack and vulnerability, which leads to a strong desire to accumulate power, status and wealth. Personality disorders such as psychopathy and malignant narcissism are extreme forms of separation, and so lead to extreme forms of ‘evil’ behaviour.  This issue becomes especially urgent when people with a severe lack of empathy – who are egocentric, ruthless and even psychopathic – occupy positions of political power. As the concept of ‘pathocracy’ shows, this is depressingly common.

Steve then discusses whether separateness or connection are fundamental to human beings. Our culture assumes that separateness is fundamental, and this has had a disastrous effect, emphasising and encouraging individualism and selfishness. As Steve’s philosophy of panspiritism  suggests,  human consciousness is a manifestation of a more fundamental universal consciousness, which is ‘transmitted’ into us via (primarily) the brain. When human beings experience our interconnection, we feel empathy and compassion. Altruism and social justice result from this. Our sense of separation is superficial and aberrational.  One of the goals – arguably the main goal – of spiritual practices and paths is to transcend the sense of separateness and attune to our fundamental oneness. In this way, spiritual development is intimately connected with altruism and social justice.

⦿ Please note: this is a donation-based event.