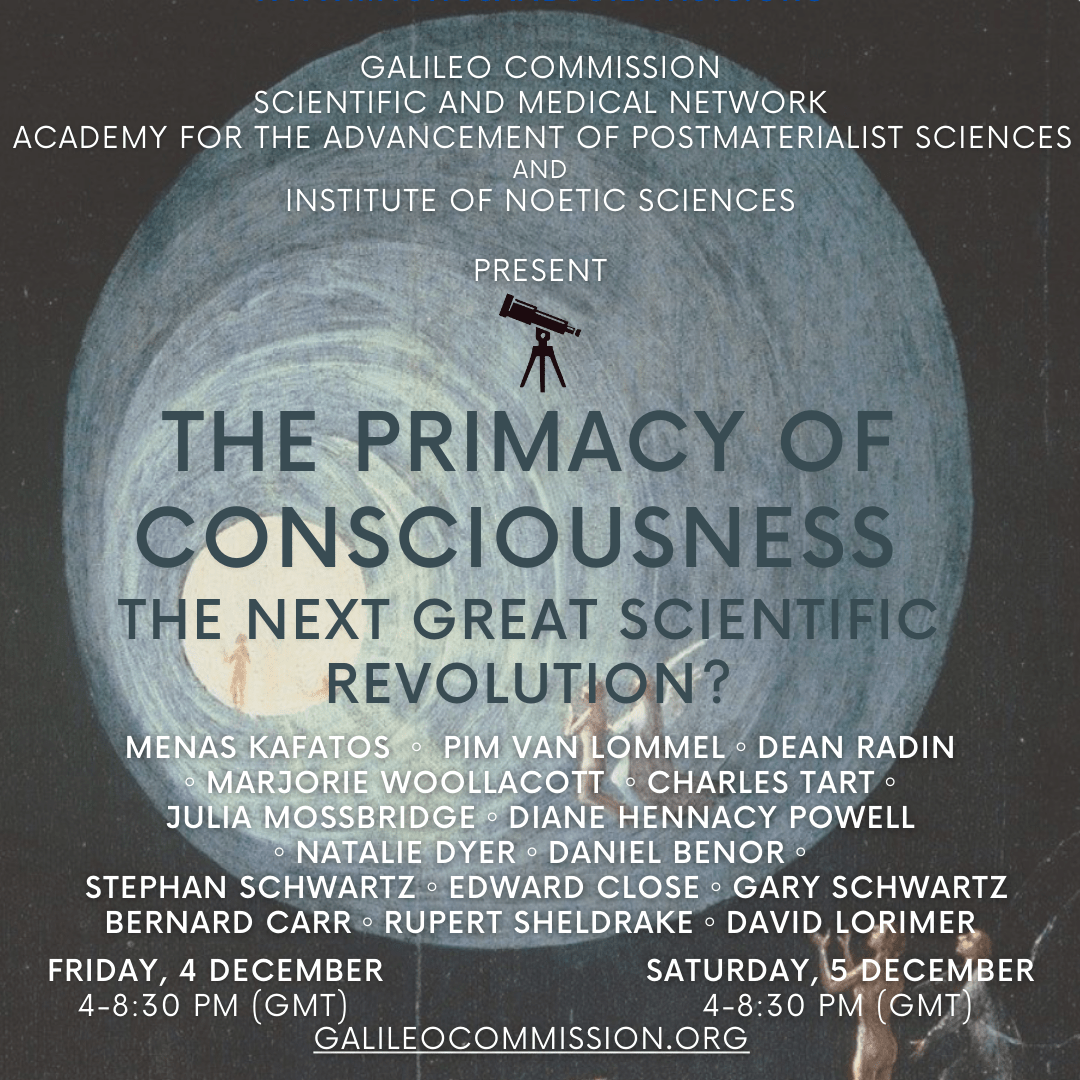 The Primacy of Consciousness – The Next Great Scientific Revolution?

Academy for the Advancement of Postmaterialist Sciences

“I regard consciousness as fundamental, matter is derivative from consciousness. We cannot get behind consciousness. Everything that we talk about, everything that we regard as existing, postulates consciousness. There is no matter as such; it exists only by virtue of a force bringing the particle to vibration and holding it together in a minute solar system; we must assume behind this force the existence of a conscious and intelligent mind. The mind is the matrix of all matter” – Max Planck

What if consciousness is fundamental and even primary?

Join some of the world’s leading consciousness researchers for a series of round tables to launch the landmark Academy for the Advancement of Postmaterialist Sciences (AAPS) volume: Is Consciousness Primary?

The Galileo Commission report argues for an expansion of the philosophical basis of a science of consciousness beyond the conventional physicalist worldview by widening the evidence base to examine the implications for our understanding of reality of research into significant human experiences such as veridical OBE perceptions in NDEs, children who remember previous lives, and extensive scientific studies of parapsychological phenomena. The Galileo Commission encourages scientists and academics to ‘look through the telescope’ at this evidence base that represents a fundamental challenge to the prevailing materialistic outlook.

There is now growing support for the idea that consciousness is fundamental and even primary, as Max Planck noted – and these views have considerably greater explanatory power when it comes to accounting for this wider evidence base, which materialist positions tend to ignore or dismiss – as Jeff Kripal observes, our conclusions are a function of our exclusions and that to ‘dismiss is to miss’.

This first Galileo Commission Summit will feature a series of roundtables with most of the prominent researchers in this first volume of the AAPS book series Advances in Postmaterialist Sciences, created with the intent of educating scientists, students, and science-minded readers about postmaterialist consciousness research and its applications. The intention is that each volume combines rigour and creativity, expresses first person (inner experiences) as well as third person (external observations), and facilitates the betterment of humanity and the planet.

The inspiration for the theme of this first volume, “Is Consciousness Primary?” came about at the end of the first meeting of the Founding Board of Directors of the Academy for the Advancement of Postmaterialist Science in August of 2017 in Tucson, Arizona.

During the last session of the meeting, each presenter shared the evolution of the thinking and research that had led them to accept the idea that nonlocal

consciousness, not physical or biological matter, is causal and fundamental. The group was intrigued by the overlapping themes they heard from their co-presenters, spread across the group’s varied research in neuroscience, psychology, physics, and clinical medicine.

It was suggested that each presenter at the meeting share their research and conclusions in chapters to be published in this volume, in which they each respond to the question “Is Consciousness Primary?” through examples from their own life experience and research. We believe this volume is unique in sharing both the contributing authors’ first-person experiences that transformed their understanding of the primacy of consciousness, and the research that supports this perspective.

Read the Layman’s Guide to the Galileo Commission report here.

“The scientific world is to a very large extent in denial about consciousness. These essays on the primacy of consciousness go a significant way towards addressing such a limitation” – Prof Brian Josephson, FRS; Nobel laureate, Physics; Emeritus Professor of Physics, University of Cambridge.