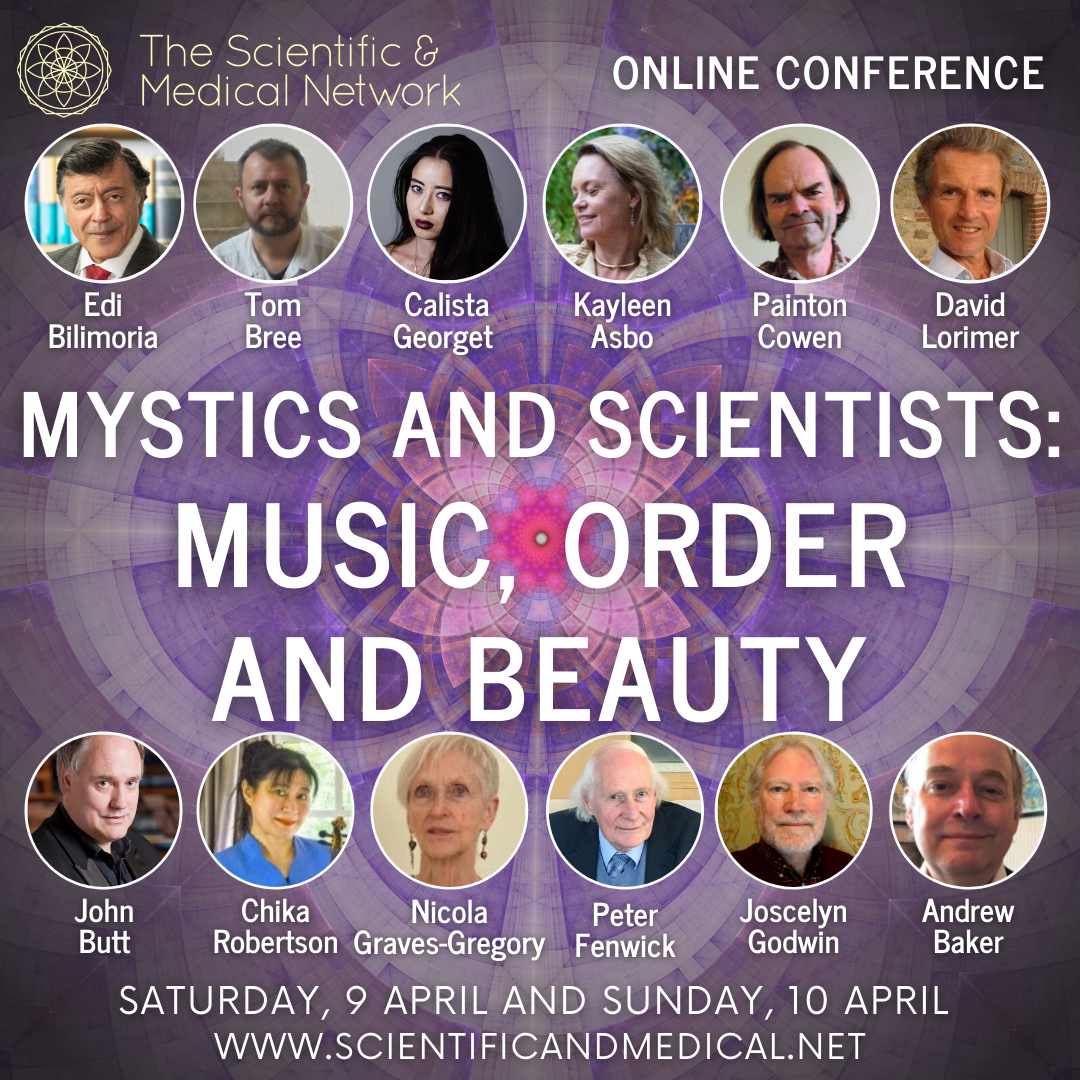 “Music is an agreeable harmony for the glory of God and the permissible delights of the soul.”

Come and join us online for the 2022 annual Mystics and Scientists conference!

For over 40 years these meetings have been dedicated to forging a creative understanding of the complementary roles of scientific and mystical approaches to reality. Our topic this year is Music, Order and Beauty, echoing early Winchester themes from the 1980s on Music, Mathematics and Number and Music, Mysticism and Magic, where Joscelyn Godwin also spoke and gave a beautiful harpsichord recital.

Our speakers, which include Dr Kayleen Asbo, Dr Edi Bilimoria, Tom Bree, Prof John Butt, FBA, Painton Cowen, Prof Joscelyn Godwin, Nicola Graves-Gregory, Bettina Schmidt and David Lorimer, will cover the transcendent music of Bach and Beethoven, sacred geometry and mathematics, sacred dance and movement, light and beauty reflected in paintings and stained glass. Our aim is to provide you with what Bach called ‘refreshment of the spirit’ at a transitional time of chaos and turbulence by reminding ourselves of our common spiritual grounding and rootedness in Being – one could paraphrase Plato on time by saying that music is a moving image of eternity. We very much look forward to your participation!

Here are just a few of the great comments we received at the end of our 2021 event:

Best conference I’ve ever attended and I’ve attended many good ones, especially SMN ones!

Great conference and amazing ‘SMN’ community! Many thanks for organizing it.

Thanks everybody, deep gratitude to you all!

Thank you to everyone – such an inspirational weekend.

Thank you so much, Namaste and love – a wonderful and life-changing weekend.

A Lonely Triumph of a Spiritual Warrior over Personal Suffering

A Way to Grow Our Sense for Beauty

2:10 pm         Introduction to the Scientific and Medical Network by Chairman Paul Filmore

Dr Edi Bilimoria: Beethoven Composed for the Empire of the Mind – A Lonely Triumph of a Spiritual Warrior over Personal Suffering

Beethoven stated in his Heiligenstadt Testament that it is the most difficult for an artist to become a philosopher. Why? Because of the need for detachment; and for an artist full of passion and feeling this is the most difficult to achieve. But the detachment of a cold-hearted person is not true detachment, but merely callousness. What kind of detachment, then, was Beethoven referring to? Crucially, what was his philosophy that spurred him to affirm: ‘music is the mediator between the spiritual and the sensual life’? How does the ineffable content of music and of life reflect and echo each other: to study music is to learn about life; and to look at life is to learn about music?

‘Kill out all ambition, but live like one ambitious.’ This famous saying from the mystical verses from Light on the Path encapsulates Beethoven’s whole approach to his great Art. This lecture will show how Beethoven sacrificed every personal necessity to the cause of his Art and that his inspiration drew directly from the highest fountain of religious feeling, philosophical insights and spiritual wisdom. His personal trials and tribulations were the stepping stones to his ultimate triumph over adversity. He scaled the lofty heights alone. He wrote only for the Empire of the Mind.

Nicola Graves-Gregory: Mathematics: A Way to Grow Our Sense for Beauty

The Pythagorean origin of ‘mathematics’ is ‘ta mathemata’, ‘those things that have been learned’. This learning was through Pythagorean philosophy, which originally meant ‘the wisdom of love’. Pythagorean mathematics was not only the predominantly quantitative, technical and visual subject that we now know; it was also qualitative, spiritual and musical. 21st century Pythagorean mathematics is the renaissance of this holistic approach. Developing our sense for beauty is part of this. The neuroscientific work of Prof. Zeki (UCL) validates this.

Screening of a film about John Henry Lorimer

John Henry Lorimer RSA, ARA (1856-1936) was a notable Scottish painter of portraits and landscapes. An exhibition of his work The Light and Life of John Henry Lorimer, co-curated by Charlotte Lorimer, ran at the City Art Centre in Edinburgh from November 2021-March 2022. The film script by John Henry’s niece Esther Chalmers was discovered by Charlotte in the National Library of Scotland archives, and the producer is Beetle Campbell. David Lorimer will show a few slides of the paintings and add some illustrating the work of his architect grandfather (and JH’s brother) Sir Robert Lorimer, KBE, RSA.

Pythagoras was both scientist and mystic. His harmonic researches were a landmark in experimental science; he studied the effects of music on soul and body; and he reputedly heard the Music of the Spheres: a concept with lasting historical resonance, both scientific and metaphysical. This illustrated talk traces that resonance up to its modern representatives: Ernest McClain, who discovered the far older harmonic philosophy to which Pythagoras was heir, and Hans Kayser, who demonstrated its value as a universal science and as a possible hope for humanity.

This presentation explores some of the ways in which Bach may have conceived music, from the inherited traditions of music and the cosmos together with the newer thoughts on how music related to the human soul. Then there are the theological conceptions of music inherited through the Lutheran tradition, which were facing both opposition and renewed enthusiasm in Bach’s own time. But it is worth looking at some of the more difficult areas to discern: how music might relate to substance in general; how it might relate to thought (both in the abstract and in real time); how it might relate to viewpoint; and particularly how it might relate to physical movement. By comparing some of the ways in which it may have been possible to think in Bach’s environment, much of the guesswork can be informed by the ways that the music seems to have been constructed and designed to sound in real time.

J.S.Bach and the Quest for Divine Harmony

Beinsa Douno (Peter Deunov, 1864-1944) was a Bulgarian Sage and musician whose main instrument was the violin. He composed over 200 songs as well as the music for his sequences of sacred dance movements called Paneurhythmy (literally universal harmony of movement). This talk will explain the background and significance of paneurhythmy as an embodiment of Douno’s key principles of Love, Wisdom and Truth.

Painton Cowen will speak about the beauty of stained glass and rose windows in the breakthrough of Gothic architecture from the twelfth to fifteenth centuries …. as seen in mediaeval times and in the light of today.

Tom Bree: Geometry as a Visible Image of Harmony

Harmony is the True state of the soul – and one of the primary ways in which the soul is reminded of True Self is through the experience of numerical patterns. Such patterns can be experienced temporally through the rhythms and pitch vibrations of music. But they are also visually encountered through the manifest forms of geometry.

The visible cosmos is pervaded by geometric patterns whether it be the golden relationships and Fibonacci numbers of organic growth or the crystalline geometry of the snowflake. Even planetary movements exhibit geometric relationships marked out as they are by ‘spherical’ planets forever revolving in ‘circular’ orbits. All of these cosmic numerical expressions could be described as the manifest thoughts of the Divine Mind in Its perpetual contemplation of the Eternal Forms of number. But ultimately all divine thoughts are prayers because prayer is the conscious mode of Being – and in this sense the most universal language of prayer involves the eternal and unchanging truths of number.

This illustrated talk will focus upon several examples of geometric patterning both as a naturally existing phenomenon in the surrounding world as well as a conscious artistic practise on the part of the contemplative artist who aspires toward ‘anamnesis’ or ‘remembrance’ of True Self.

Hildegard, a 12th century Benedictine Abbess whose illuminated visions and works on theology have earned her the distinction of being one of the only female Doctors of the Catholic church; J.S. Bach, a Lutheran cantor who lived 500 years later, loved dancing and fathered 20 children. Despite the obvious differences in their outer lives and religious faith, each flowered from the root of adeep and profound mystic connection after overcoming intense childhood trauma. In this multimedia presentation with art and music, we will examine how Hildegard and Bach, in the tradition of Pythagorean philosophy, “tuned” their souls to a life of order, balance and harmony through music and engaging the “tension of the opposites”.

Prof Bettina E. Schmidt, DPhil (habil.), PhD, MA, is a Professor in the Study of Religions and Anthropology of Religion at the University of Wales Trinity Saint David, UK, and Director of the Religious Experience Research Centre in Lampeter, UK. She served as President of the British Association for the Study of Religions (2018-2021) and is currently the deputy chair of the REF sub-panel Theology and Religion. Her main areas of research interests are Latin American and Caribbean religions, identity, and wellbeing. Her academic interests include religious experience, anthropology of religion, diaspora, and medical anthropology. Among her most important publications are Spirit and Trance in Brazil: An Anthropology of Religious Experiences (2016, Bloomsbury), Caribbean Diaspora in the USA: Diversity of Caribbean Religions in New York City (2008, Ashgate), Handbook of Contemporary Brazilian Religions (edited with Steven Engler, 2016, Brill) and Spirituality and Wellbeing: Interdisciplinary approaches to the study of religious experience and health (edited with Jeff Leonardi, 2020, Equinox).

Andrew Baker is a composer and historical researcher and Franciscan Tertiary. For many years he was a Music Librarian. His most important areas of interest have been Thomas Anson of Shugborough and the rediscovery of a circle of Platonists who opposed the materialism of the day, including James Harris and Floyer Sydenham, and the Franciscan cosmological and musical tradition. He has recently given talks to the Temenos Academy and the Fintry Trust. He also makes films, exploring the Spirit of Place, with his own music, and sometimes with marionettes. Find out more here: https://andrewbakercomposer.com/