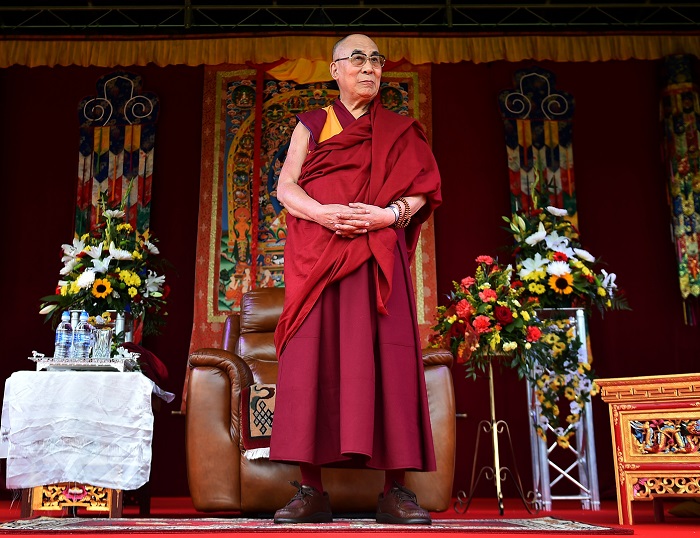 On Monday, 28th June 2015 I attended the 80th birthday celebratory visit of His Holiness the Dalai Lama for the opening of the Buddhist centre in Aldershot, this being an area identified as having the largest population of Buddhists in the UK, and having strong links to the Gurkha and Nepalese community. The packed event was held in the enormous 7000-seater ESS stadium of Aldershot Football Club – not exactly my kind of ‘thing’, but a local SMN member kindly invited me, so I went along. I’m glad I did. I summarise the salient features of the Dalai Lama’s address with my brief comments in [square brackets] before commenting on the aggressive protests by a counter group who tried to disrupt the meeting.

During the entire proceedings, a counter ‘religious’ sectarian group staged a loud protest from across the stadium. It was the International Shugden Community associated with the cult of Dolgyal Shugden apparently with strong links with the Chinese Communist Party authorities in Tibet – yes, that toxic cocktail of ‘religion’ and politics. According to the statement put out by the Tibetan Buddhist Community in Britain, 12 June 2015, their propaganda features an offensive depiction of His Holiness as a pig; as a ‘Muslim masquerading as a Buddhist’; and echoing the allegations of the Chinese government in Beijing, he is also compared to Hitler [the mind boggles, but please see the last paragraph.]. Around 600 of them chanted ‘False Dalai Lama, Stop Telling Lies’ for well over two hours. Monotonous repetition of a single phrase is a well-known brain-washing technique to wear down an opponent but in this case it really had the opposite effect. Far from being worn down , the Dalai Lama’s message of direct simplicity actually strengthened the collective ‘immunity system’ of the gathered assembly; the unity and happiness was palpable. I could not detect even a whiff of bad language or counter-aggression amongst his several thousand well-wishers. This was living proof of the Christ’s injunction about not resisting mosquitoes (evil) using a ‘repellent’, but rather turning the other cheek and shining one’s own light. Apropos, Edward Hyde, First Earl of Clarendon, a member of Ben Jonson’s circle and cultural inheritor of Francis Bacon’s thought maintained that because evil eventually destroys itself, one doesn’t have to confront it head-on; one simply has to wait.

As I said in a previous article ­ – Jewels Made From Diamonds Or Plastic? – the need to attack rather than resort to reasoned arguments and dignified language demonstrates the weakness of the attacker’s position (totally irrespective of the context, whether in religion, science or politics): otherwise why attack someone unless what he says is a threat to your own preconceived conceptions. Moreover, the aggressiveness of the attack is directly proportional to the validity of what the ‘attacked’ has to say.

The Bee and the Spider

We conclude with an ancient alchemical adage: Wisdom is as a flower from which the bee its honey makes and the spider poison, each according to its own nature. (By an unknown adept.) If we equate wisdom with spirituality and religion, person such as Bach, Newton and Schweitzer have drawn upon the nectar to bestow sublime music, lofty science and boundless philanthropy; whilst the fanatics and terrorists have served us with bloodshed and terror. But the flower is exactly the same; what varies in the extreme is the nature. Is it of the bee, or of the spider?