Do our minds have quantum structures that give rise to consciousness? Sir Roger Penrose, one of the world’s most famous scientists, believes this and can explain how he thinks it works.

Human consciousness is one of the grand mysteries of our time on earth. How do you know that you are “you”? Does your sense of being aware of yourself come from your mind or is it your body that is creating it? What really happens when you enter an “altered” state of consciousness with the help of some chemical or plant? Are animals conscious? While you would think this basic enigma of our self-awareness would be at the forefront of scientific inquiry, science does not yet have strong answers to these questions.

One way to think of consciousness is to conceive of it as a byproduct of numerous computations that are happening in your brain.

The global workspace theory of consciousness, developed by Bernard Baars, a neuroscientist at the Neurosciences Institute in La Jolla, California, says that maybe consciousness is simply the act of broadcasting information around the brain from a memory bank.

But there are some who think our attempts at understanding the nature of consciousness through neuroscience are doomed to fail unless quantum mechanics is involved. World-renowned Oxford University mathematical physicist Sir Roger Penrose, for one, thinks that consciousness has quantum origins.

Together with noted anesthesiologist Stuart Hammeroff, who teaches at the University of Arizona, Penrose came up with the Orchestrated Objective Reduction theory of the mind. The theory is somewhat outlandish, but cannot be easily dismissed considering that Roger Penrose is regarded by many as one of the world’s most brilliant people for his contributions in cosmology and general relativity. He is known also for his prize-winning work with Stephen Hawking on black holes. Physicist Lee Smolin once remarked that Penrose is “one of the very few people I’ve met in my life who, without reservation, I call a genius.” 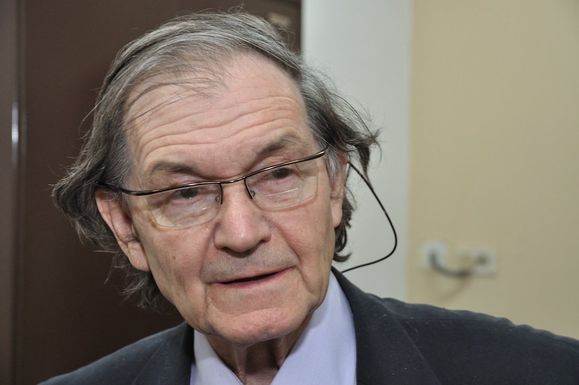 Penrose believes that consciousness is not computational. Our awareness is not simply a mechanistic byproduct, like something you can make a machine do. And to understand consciousness, you need to revolutionize our understanding of the physical world. In particular, Penrose thinks the answer to consciousness may lie in a deeper knowledge of quantum mechanics.

In an interview with Nautilus’s Steve Paulson, Penrose uses an example from quantum computing to explain that qubits of information remain in multiple states until coming together into an instantaneous calculation, called “quantum coherence,” making a large number of things act together in one quantum state.

Here’s where Penrose’s theory draws upon the work of Hameroff by saying that this quantum coherence takes place in protein structures called “microtubules”. These microtubules reside inside the neurons in our brains and can store and process information and memory. Penrose and Hameroff think that microtubules are quantum devices that are orchestrating our conscious awareness.

This theory is not appreciated by everyone in the scientific community, with many critics saying the brain is too “warm, wet, and noisy” and cannot sustain a quantum process. Another physicist, Max Tegmark, even calculated that the brain cannot possibly think as fast as this idea requires. Hawking is also not on board, suggesting Penrose should stick with his field of expertise.

Yet, a 2013 study by Japanese scientists added some proof to the theory by Penrose and Hameroff as researchers detected vibrations in the microtubules. Penrose and Hameroff then proposed that by focusing brain stimulation on these vibrations one could conceivably “benefit a host of mental, neurological, and cognitive conditions.”

Still, this theory of consciousness is rather on the outs in a field that hasn’t had much advancement in a while.

In 2017, Sir Roger Penrose launched the Penrose Institute to study human consciousness through physics and to differentiate it from any potential artificial intelligence.

Watch Sir Roger Penrose explain how he came to conceive of quantum structures in the brain:

All Credits to Big Think