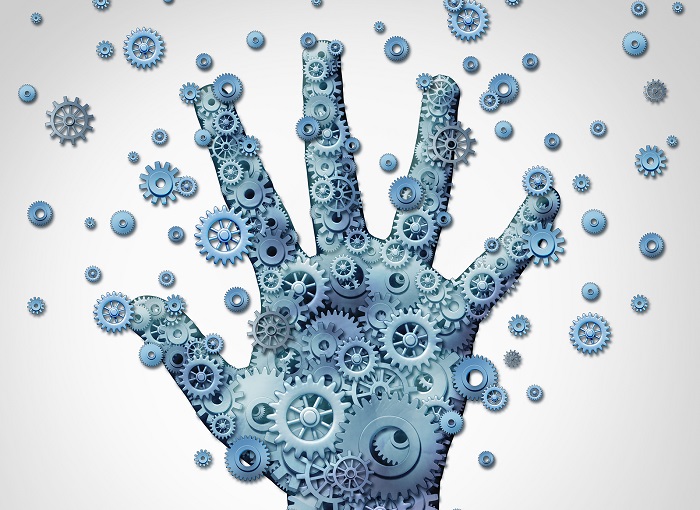 Whenever we have been furnished with tar baby ostensibly stuffed with jewels, and warned that it will be dishonourable and irreverent to disembowel it and test the jewels, we keep our sacrilegious hands off it. We submit, not reluctantly, but rather gladly, for we are privately afraid we should find, upon examination, that the jewels are not diamonds but manufactured out of cheap plastic.
Mark Twain[1]

In Trick or Treatment? Alternative Medicine on Trial, Edzard Ernst and Simon Singh (who is currently suing the NHS over its support for homoeopathy), opine that if indeed the hands and feet ‘reflect’ the internal organs, then treatments like reflexology might be expected to explain how such ‘reflection’ was derived from the process of Darwinian natural selection. But Singh says that no argument or evidence has been adduced. Transworld, 2008. ISBN 978-0-593-06129-9.

By interpolation, stimulating regions of the hand (instead of the feet as in reflexology) would be a trick and not a treatment. ‘Unfortunately’ though, recent research done at the University of Sussex has shown that human emotion can be transferred by technology that stimulates different parts of the hand without making physical contact with your body. For example, short, sharp bursts of air to the area around the thumb, index finger and middle part of the palm generate excitement, whereas sad feelings are created by slow and moderate stimulation of the outer palm and the area around the ‘pinky’ finger. We shall call this ‘palmology’. http://www.sussex.ac.uk/alumni/newsandevents/news?id=30095.

The fatal flaw in the Singh et al argument is that ‘the process of Darwinian natural selection’ takes no cognizance of subtle energies or consciousness. The esoteric and occult doctrines of every age and culture since time immemorial have affirmed the existence of spinning vortices of spiritual energy located at various points along the spinal column and called chakras, or whirling wheels, by the Hindus. Seven of these chakras are of prime importance and have their individual correspondences in the nerve ganglia and plexuses. These centres and other subtle energies figure strongly in some form or the other in Complementary Medicine (CM); but are completely outside the purview of physical medicine, colossal though its achievements undoubtedly are. If natural selection cannot account for reflexology or palmology, then it is natural selection that must be modified or replaced by a better theory, instead of the evidence jettisoned because it cannot be tailored to an outmoded theory.

However the Sussex findings are arguably a good example of what might have been filtered out into the trash-can of New Age ideas – using the Simon Singh argument – but, by virtue of being technology driven, has attracted £1 million funding by the European Research Council for a five-year project extension. This is how the scientific establishment deals with anomalous evidence by way of cherry picking and selective ‘knowledge filtration’ – the term used by Cremo and Thompson in Forbidden Archaeology.

Other than outright attack as in the case of Sheldrake and Nagel, or against homoeopathy, all new ideas are passed through a ‘truth filter’. Those ideas that are in agreement with the establishment are filtered through and published; but any hard facts and evidence that do not uphold the orthodox opinion are swiftly mangled and dropped into a trash can, even though they may be of considerable scientific merit. The point is that the religious equivalent of blasphemy is not tolerated by the scientific community among any of its members who are not staunch ‘defenders of the faith’.

We can discern two primary mechanisms for suppressing, forging, mutilating, ignoring, or just quietly forgetting evidence that blatantly contradicts currently accepted ideas. The first is the deliberate attempt by a few politically powerful scientists to block any evidence that runs against established opinion (upon which large research grants and industrial funding also depends); and the second is more in the nature of an on-going social process of knowledge filtration that appears insignificant in small doses, but has a major cumulative effect over time, whereby any kind of embarrassing evidence is quietly allowed to disappear into oblivion. In both cases however, the public at large do not get a balanced perspective and are, in effect, being deceived. Cheating and deception involve not just the deliberate falsification or mutilation of data, but also failing to report, whether or not the motives be deliberate or unconscious, since the yearning for glory and power are powerful drives amongst some scientists.

What two general lessons can we learn? Firstly the viciousness of the attack is directly proportional to the validity of what the ‘attackee’ (i.e. victim) has to say. Invariably it is driven by ego-stroking publicity appeal, than by anything remotely approaching evidence. Unsurprisingly, the most vociferous attacks either upon religion or upon scientific or medical theories with even a whiff of a hypothesis beyond pure materialism come from the materialist camp – those who maintain that scientific materialism and Darwinism are the sole arbiters of truth. The pre-eminence of the scientist under attack is of no consequence. The need to attack rather than resort to reasoned arguments and dignified language demonstrates two facts. Firstly, it shows the weakness of the attacker’s position: otherwise why attack someone unless what he says is a threat to your own preconceived conceptions, and the power, position and fame that go along with such a stance. But it also shows that the head and the heart are at loggerheads, so to speak in the attacker’s psyche; that something deeper inside the person, something that transcends his left brain is saying that all is not well, hence the need to attack in order to fortify and police the conceptual paradigm and of course enjoy the publicity and sense of purpose that comes with this.

Secondly, if the mind-set is exclusively intellectual or rather, left brained, then it is in the nature of such intellect to analyse, cut up and dissect – the complete contrary of a rounded and holistic approach that never denies but subsumes intellect. Therefore he who cuts up and divides adopts very much a them-and-us attitude of warfare against the enemy just to prove he is wrong – the very title of Singh’s book makes the pont: the medicine is complementary, not alternative. So the more the individual is intellectually polarised, and especially if he is an angry person in righteous denial, the more he will wage a jihadist campaign against his imagined opposition.

Our suggested best form of defence should be to leave the likes of Singh well alone and quietly get on with the job of demonstrating, with strict impartiality, where CM works and where it does not, plus investigating and understanding more the underlying mechanisms.

So let’s ponder over another of Mark Twain’s perspicuous observations:

And whenever we have been furnished a fetish, and have been taught to believe in it, and love it and worship it, and refrain from examining it, there is no evidence, howsoever clear and strong, that can persuade us to withdraw from it our loyalty and our devotion.

[1] Twain wrote the above in connection with the Shakespeare – Francis Bacon controversy, but his remarks could apply with equal force to the fetishist worship of enshrined ideas. The reference to plastic is to make clear the message behind the quotation which actually ends with the words ‘that the jewels are of the sort that are manufactured at North Adams, Mass’.